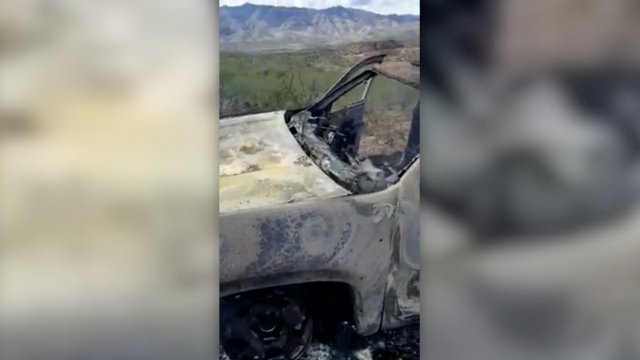 Authorities say a potential suspect in the ambush that left nine family members dead in northern Mexico actually wasn't involved in the crime.

The state prosecutor's office in Sonora announced the suspect's arrest in a statement Tuesday. It said the unidentified person was detained in the town of Agua Prieta, which is near the border of Arizona. Officers found the suspect in a vehicle with two people who were bound and gagged. Authorities said they also uncovered several rifles and a large amount of ammunition.

On Monday, three women and 14 children were traveling between Sonora and Chihuahua when their vehicles were ambushed, shot at and set on fire. The women and six of the children died. The other eight children survived by hiding or running away.

The victims were dual U.S.-Mexican citizens and members of the LeBaron family, which is part of a fundamentalist Mormon community that moved to Mexico several decades ago. Mexico's security minister said the sport utility vehicles the women were driving "could have been confused with the criminal groups that are fighting in the region."

Two rival gangs, La Línea — which is linked to the Juaréz cartel — and Los Chapos — a part of the Sinaloa cartel — have been fighting over the northern state of Sonora, and it's not unheard of for civilians to be caught in the crossfire. But, as The New York Times reports, this particular community has been targeted by cartels before.