Oil Continues To Spill Into Indian Ocean Near Mauritius 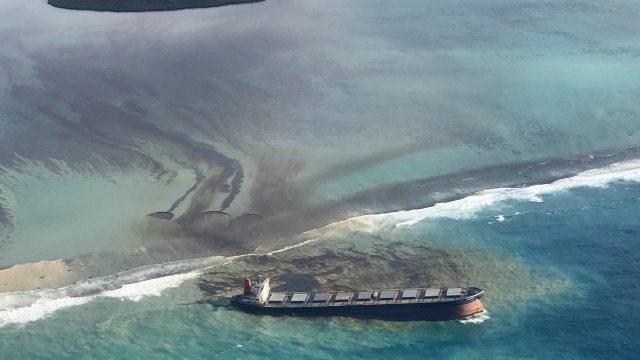 A leaking Japanese tanker in the Indian Ocean is threatening thousands of species in a sea of pollution.

The small island nation of Mauritius has declared a state of emergency after an oil spill off its coast continues to spread into the Indian Ocean.

Environmentalists and residents have worked to contain the damage caused by a leaking Japanese ship. The MV Wakashio collided with a coral reef on July 25 as it was on its way from China to Brazil.

Officials say about a quarter of the four tons of oil stored in the ship's cargo has already leaked into the ocean. Workers were battling high winds and rough seas on Sunday and there were reports of new cracks to the ship's hull.

Prime Minister Pravind Jugnauth says the oil spill won't just affect the environment, but residents of the African nation, too. Since the pandemic began, Mauritius, which is known for its beaches and coral reefs, has suffered a loss in its tourism revenue. The oil spill will only contribute to a downturn in visitors.

A Greenpeace spokesman said thousands of species are at risk of drowning in a sea of pollution. A shipping company executive told reporters, "We apologize profusely and deeply for the great trouble we have caused."