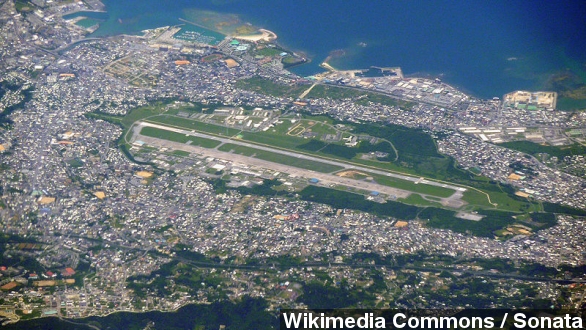 A controversial U.S. military base in Japan is finally set to move after a 17-year deadlock.

A controversial U.S. military base in Okinawa, Japan, will be relocated, breaking a 17-year deadlock.

"The local governor has now given his approval to move Futenma air base from the center of Ginowan City to a remote part in the north of the island." (Via Euronews)

The new base will be constructed in a sparsely populated area of the island away from neighborhoods and schools. (Via Bloomberg)

Talk about the relocation of the Futenma air base started back in 1996 after a 12-year-old Japanese girl was raped there by three U.S. military personnel. (Via CNN)

Several other accusations of rape, including of minors, have made the base a controversial topic. (Via CNN)

Earlier this year, thousands gathered outside the base in a demonstration against a possible expansion. (Via NBC)

After Gov. Hirokazu Nakaima's approval Friday, about 1,000 Japanese citizens protested the decision and called for him to retract his approval. They are pushing for the base to be removed altogether. (Via The Japan Times)

"The [Japanese] government has been arguing with the Obama administration about the location of this base. … The locals say the base is noisy and dangerous." (Via Bloomberg)

The new base is expected to be completed in the next decade, and the old base could close in the next five years. The number of Marines stationed on the island would drop from 18,000 to 10,000 once it's completed.

Although Nakaima approved the move, he later said he's skeptical that the relocation is feasible and that he'd prefer for the base to move out of the region instead. (Via The New York Times)

Prior to Nakaima's decision, environmental concerns and a pledge by Prime Minister Yukio Hatoyama to move the base completely off the island had delayed negotiations. (Via Stars and Stripes)

Despite backlash from the Japanese people, U.S. Defense Secretary Chuck Hagel called the move "a critical part of the realignment of U.S. forces on Okinawa." (Via Businessweek)