Teachers In Oklahoma And Kentucky Walk Out Over Funding, Salaries 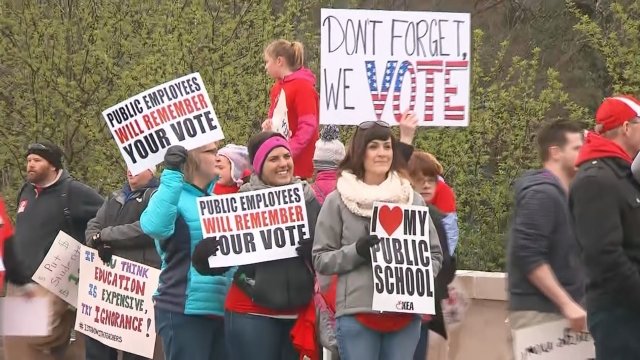 Teachers in both states marched at their state capitols Monday.

Teachers in Oklahoma and Kentucky marched at their state capitols Monday, the latest walkouts from school workers in the United States.

In Kentucky, teachers are protesting a pension reform bill the state government passed on Thursday. In Oklahoma, teachers are seeking a pay raise and increased government funding for education.

"Teachers are working several jobs. In addition, they're also taking money out of their own pockets, money that they don't really have, to supplement the materials that they're providing for their students," said David DuVall, executive director of the Oklahoma Education Association.

Monday's protests come less than a month after school workers in West Virginia received a 5 percent pay raise from lawmakers after a nine-day strike.