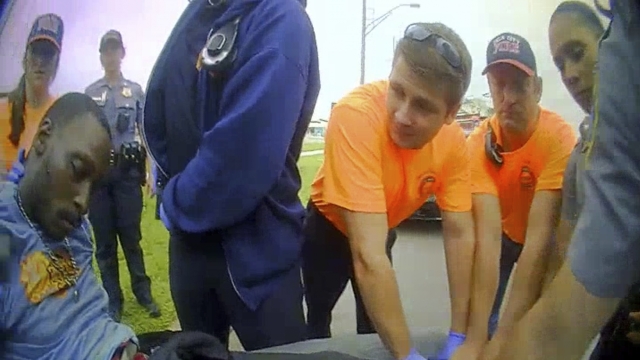 Oklahoma City police released footage of a 2019 arrest during which a Black man repeatedly tells officers, "I can't breathe."

The Oklahoma City Police Department has released body camera footage of a 2019 arrest of a Black man who died shortly after telling his detaining officers that he couldn't breathe.

In the video, officers are seen tackling Derrick Scott following a chase. As Scott is pinned to the ground, he tells officers, "I can't breathe." One officer replies, "I don't care." Paramedics are later seen placing Scott on a gurney after he appears to go in and out of consciousness. He was then taken to a hospital, where he was pronounced dead.

An autopsy report obtained by NBC News lists Scott's probable cause of death as a collapsed lung. It also pointed to several other factors that likely contributed to his death, including physical restraint, recent methamphetamine use, asthma, emphysema and heart disease.

All of the officers involved in the incident were cleared of any wrongdoing by the Oklahoma County District Attorney, who told The Associated Press: "This guy runs from the police. He's got a 90% occluded major artery in his heart. I mean, he's just a perfect candidate to die when you've got meth in your system and those kinds of physical ailments and then you fight with police. They didn't do anything wrong at all."

The footage of Scott's arrest was released after the Oklahoma City Black Lives Matter chapter demanded it amid worldwide protests sparked by the death of George Floyd.