Oklahoma Residents Could Soon Carry Guns Without A Permit Or License 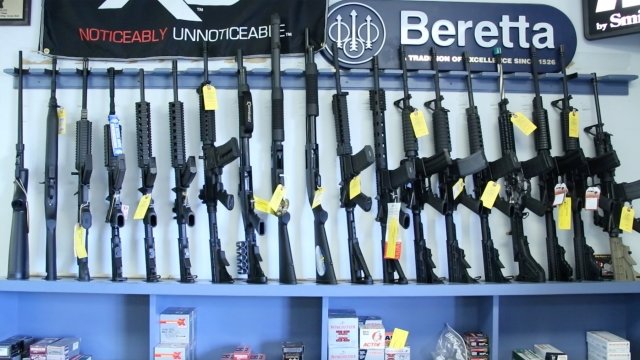 Oklahoma's governor might soon sign a bill into law that would let people 21 or older carry a gun without a permit or license.

Oklahoma could soon let some residents legally carry guns without a permit or license.

Oklahoma's Senate sent a new firearms bill to Gov. Mary Fallin on Thursday. If she signs the bill into law, it will let gun owners 21 and older and military members 18 and older carry their firearms without having to get a permit or license.

Gun owners wouldn't be able to carry firearms into places where they're prohibited by law, like some government-owned buildings or schools.

And the state does still require background checks before customers can buy guns.

Some of the bill's supporters say requiring a license to carry, only hampers law-abiding gun owners. They argue that criminals don't follow gun laws, anyway. Critics of the bill say it could let dangerous people legally carry.

How Guns Move: Understanding The Deadly Game Of Weapons Proliferation

Whether it's ISIS looting a depot in Syria, or someone in the U.S. mailing a weapon part to Europe, weapons proliferation is vast and complex.

The Oklahoma chapter of Moms Demand Action for Gun Sense in America said in a statement the legislation could make it easier for people with criminal records to carry guns in public.

But that might not be true. The bill does say that it's unlawful for anyone convicted of a felony to possess a firearm of any kind.

Twelve other states have similar laws allowing residents to carry guns without a permit.

Correction: A previous version of this story incorrectly said the new legislation would let Oklahoma residents purchase and carry guns without a permit. The bill only addresses permitless carry of firearms in Oklahoma. The story has been updated.