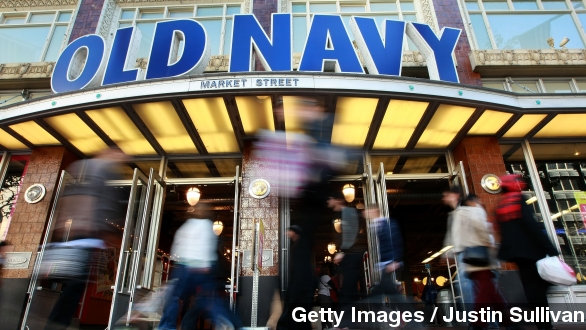 From Abercrombie & Fitch refusing to carry plus sizes to Victoria's Secret superimposing the "Perfect Body" over a group of size zeros.

In response to this markup in pricing, a woman named Renee Posey started an online petition with Change.org that rapidly approached the 25,000-signature benchmark Wednesday.

Since the petition has gained steam, Old Navy released a statement to try and explain the different prices. "Old Navy is proud to offer styles and apparel designed specifically for our plus-size female customer, which includes curve-enhancing and curve-flattering elements. … This higher price point reflects this selection of unique fabrics and design elements."

But Posey isn't buying it, writing on Change.org, "In a nutshell, I think that they are feeding us a line of bull."

Either way, the prices as of Wednesday morning remain the same — with plus-size clothes for women at least $10 more than smaller sizes.

Similarly this week, Calvin Klein came under fire, but a further investigation shows they may not be to blame.

MYLA DALBESIO VIA NBC: "I think Calvin Klein has done something really groundbreaking."

The fashion company hired Myla Dalbesio to appear in its "Perfect Fit" campaign. Dalbesio is a size 10, obviously larger than most of the models Calvin Klein has worked with.

In an interview with Elle Magazine, Dalbesio talked about being larger than a size zero and working with the iconic brand.

After the Elle story gained traction online, many on Twitter attacked the brand thinking that CK labeled Dalbesio a plus-size model — which is not the case, as stated in the very article that sparked the controversy. (Video via YouTube / StyleLikeYou)

DALBESIO VIA NBC: "They released this campaign with me right alongside all of the other girls of varying shapes and sizes and didn't make a fuss about it."

In a statement, Calvin Klein responded to the faux controversy, "The Perfectly Fit line was created to celebrate and cater to the needs of different women. … These images are intended to communicate that our new line is more inclusive."