Only Female Soldier In Tokyo's Pentathlon Sets Her Eyes on Gold 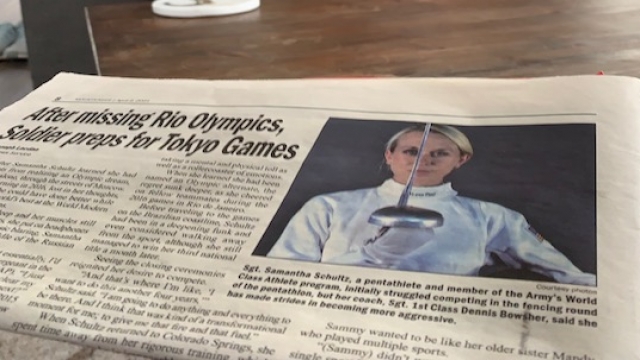 The only female soldier to qualify for Tokyo's Pentathlon says she had to overcome many obstacles while preparing for the Olympic games.

As the countdown to the 2021 Olympics quickly ramps up,  states are continuing to open up, but U.S. Olympic facilities, like this one behind me, aren’t taking any chances. They want to make sure their elite team of  competitors won’t hit any bumps in the road before traveling to Japan.

Army Sgt. Samantha Schultz’s dream is coming true. She’s headed to the Olympics to compete in the modern pentathlon, a sport that combines fencing, swimming, equestrian jumping, shooting and cross-country running -- something she has been preparing for her entire life.

“I always like looked up to Olympians and I loved. I was very athletic. and so I just wanted to be an athlete. and I think my mom actually did find a book I wrote in elementary school, and it had something about the author and said, ‘I want to go to the Olympics and swimming or skiing,” Schultz said.

But she had her share of obstacles , including multiple injuries, hip surgery, and the emergence of COVID-19.

“In 2017, I joined the army. and I think just every step along the way, all those obstacles have made me a stronger, more resilient athlete, more resilient person, too, and just really kept that drive and motivation in me to be able to get me through especially this past year of the pandemic, and the Olympics being postponed,” Schultz said.

Schultz’s dreams were seemingly squashed in 2020.

“i know, last year, putting that dream on hold was, it was definitely hard. emotionally, you get so excited, and you're so ready for the Olympics. and that training, it does take a lot of time and consistency. and it's hard on relationships, and family, and you really have to make a lot of sacrifices. so doing that another year would definitely be hard," Schultz told Newsy.

But she found unique ways to continue training.

“So I freaked out initially. I was like, okay, I have to find a pool, the pools are shut down, the gyms are shut down, the training center shut down... So, I was like, alright, let me just reset, what can I do from home, like hook up bands, get weights and try to get anything I could for training. So like, I set up a tennis ball on a target in my garage, and just did footwork for fencing, running, I could do, I could still do that.  I could still do shooting, I just set up my target at home. and I made best with what I had,” Schultz said.

She never gave up hope that she would represent her country as an athlete and an Army Sergeant.

Despite calls from health experts and even Olympic volunteers to cancel the games because of COVID, the Japanese government says plans are set in motion to hold the event from July 23 to August 8th. In fact, up to 10,000 Japanese spectators can attend each event.