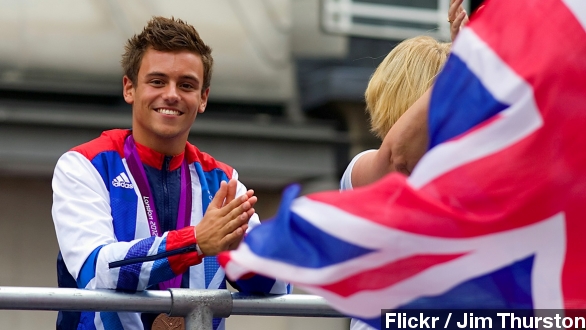 The 19-year-old champion says he still &quot;fancies&quot; girls but is feeling &quot;happy&quot; and &quot;safe&quot; in a relationship with an unidentified man.

Nineteen-year-old British Olympic diver and gold medalist Tom Daley has revealed he is in a relationship with a man.

"I met someone and they make me feel so happy, so safe. Everything feels great. Well, that someone is a guy." (Via YouTube / Tom Daley)

Daley said he was taken by surprise a bit by his romance, and now his whole world has changed. He says he still "fancies" girls but couldn't be happier.

"A perfect announcement in the perfect format for an age group that has been searching, I think, for a really positive role model." (Via UK Channel Five)

Yes, Daley is being much applauded for his video message.

The Telegraph calls Daley the "most signficant" British athlete to come out.

Daley said he made the announcement via YouTube so that his words wouldn't get "twisted." But The Baltimore Sun points out that's already happening.

"Despite all the blog headlines and Facebook and Twitter posts saying Daley 'came out' as gay, what he really did was tell the world that he is in a relationship with a man."

Still, Daley says he's excited to head to the Olympics in Rio in 2016.