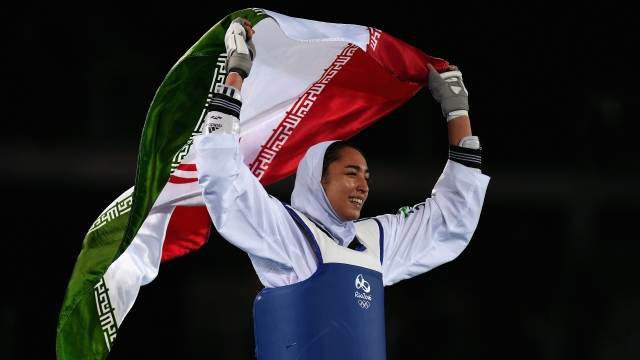 The 21-year-old wrote that Iran has used her as a political "tool" and that she has defected because of "hypocrisy, lies, injustice and flattery."

Taekwondo champion Kamia Alizadeh announced in an Instagram post on Saturday that she has defected from Iran because of "hypocrisy, lies, injustice and flattery."

The 21-year-old wrote in Persian that Iran has used her as a political "tool," and that her "troubled spirit does not fit" into the "dirty economic channels and tight political lobbies."

Alizadeh took home the bronze medal for taekwondo in the 2016 Rio Olympics. She is the only Iranian woman to ever win an Olympic medal.

She said: "I am one of the millions of oppressed women in Iran whom they have been playing with for years. They took me wherever they wanted. I wore whatever they said. Every sentence they ordered I repeated."

The medalist went on to criticize the Iranian government for attributing her success to its "management and tact," referencing its requirement for women to cover their heads with hijabs. She also said the government's political exploitation is humiliating when at the same time she's told that "it is not virtuous for a woman to stretch her legs."

According to a semi-official Iranian news agency, ISNA, Alizadeh is now in the Netherlands. Since September, two other top Iranian sports figures have defected as well.

Alizadeh wrapped up her message to the world by saying: "I have no other wish except for taekwondo, security and a happy and healthy life. ... This decision is even harder to win than the Olympic gold, but I remain the daughter of Iran wherever I am."