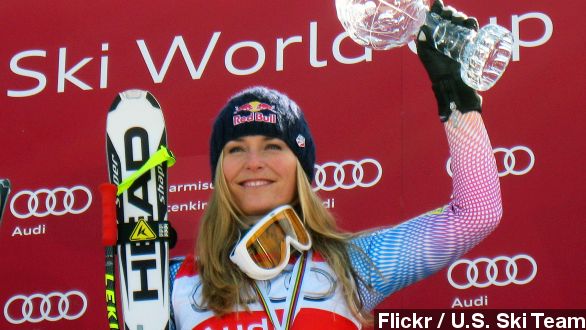 Vonn, who was set to return to the sport after a knee injury, crashed while training in Colorado Tuesday, sustaining yet another injury.

The most successful female skier in U.S. history might've suffered a major setback after injuring her knee during training. Lindsay Vonn crashed on Copper Mountain in Colorado Tuesday.

"It's still unclear what knee she hurt or the extent of the injury. Now Vonn was taken off the hill on a sled and said to undergo an immediate MRI. This comes just months before she's set to compete in the Winter Games in Sochi." (Via MSNBC)

In addition to tearing her MCL and ACL, Vonn also broke her leg in that crash. But reports indicate she's been ahead of schedule in her recovery. (Via WNBC)

Vonn planned to make her return at the Nov. 29 World Cup event in Beaver Creek, Colorado. But she's said she's fully focused on the Olympics, which start in 79 days. (Via Flickr / U.S. Ski Team)

According to USA Today, Vonn "has repeatedly said her right knee is 100% and that she had no pain or swelling after her return to the snow."

Skier Marie Von Claire tweeted this post-crash photo of Vonn Tuesday. The reigning Olympic champion appeared to be upright, with the help of two other people. (Via Twitter / @Maris_Claire)

A spokesperson for the U.S. Ski and Snowboard Association tells CNN Vonn is being evaluated and more information will be reported when it's available.

In the 2010 Winter Olympics in Vancouver, Vonn won a gold in the downhill and a bronze in the Super-G.