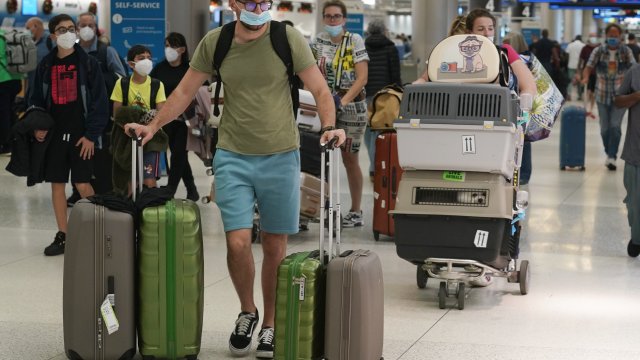 Just as Americans and Europeans were eagerly awaiting their most normal holiday season in a couple of years, the omicron variant has unleashed a fresh round of fear and uncertainty — for travelers, shoppers, party-goers and their economies as a whole.

The Rockettes have canceled their Christmas show in New York. Some London restaurants have emptied out as commuters avoid the downtown. Broadway shows are canceling some performances. The National Hockey League suspended its games until after Christmas. Boston plans to require diners, revelers and shoppers to show proof of vaccination to enter restaurants, bars and stores.

A heightened sense of anxiety has begun to erode the willingness of some people and some businesses to carry on as usual in the face of the extraordinarily contagious omicron variant, which has fast become the dominant version of the virus in the United States.

Other people are still traveling, spending and congregating as they normally do, though often with more caution. Holiday air travel remains robust. Many stores and restaurants are still enjoying solid sales. And omicron has yet to keep audiences away from movie theaters in significant numbers. This past weekend, record audiences across all demographics flocked to theaters for the new “Spider-Man” movie.

“The movie theater has not yet been hindered by omicron,” said Steve Buck, the chief strategy officer of EntTelligence.

At the same time, no one knows yet what omicron will ultimately mean for the health of the Western economies, which have endured a wild ride of downturns and recoveries since early 2020.

“These mutations keep coming,’’ said Robin Brooks, chief economist at the Institute of International Finance. “What is the probability that sometime we get a really nasty one? No one has any idea. This thing is mutating, and it’s very, very hard to say.’’

Will omicron cause outbreaks at factories and ports, disrupt operations and worsen supply chain bottlenecks that have forced up prices and contributed to the hottest U.S. inflation in decades?

Will it mean people will hunker down at home again and spend less on services — restaurant meals, concerts, hotel stays — which could weaken the economy but potentially defuse inflationary pressures?

Will return-to-office plans for white collar workers be put on hold indefinitely, deepening the hit to many cities’ downtown businesses?

Or will omicron prove a blip that scarcely slows what has become a surprisingly strong recovery from the short but intense pandemic recession?

Spooked by uncertainty and fear of the worst-case scenarios, stock markets around the world sold off for three days before rebounding Tuesday.

“We don’t know whether this is good or bad for growth or inflation in the medium term,’’ said Megan Greene, global chief economist at the Kroll Institute. “We just don’t have enough data yet.’’

Unable to assess its longer-term consequences, businesses, consumers and policymakers have struggled to respond to the omicron threat.

Danielle Ballantyne, a Chicago dietitian, had planned to visit some stores and seek inspiration for holiday gifts. But as omicron spread, she scrapped that idea in favor of staying home and shopping online.

“From what I have been hearing in the news," Ballantyne said, "omicron is more contagious. So I am trying to be more selective in where I go in terms of big public spaces.’’

At its stores in big cities like New York and Chicago, the clothier Untuckit is reporting a 15% drop in traffic, similar to what it experienced when the delta variant started spreading last summer.

“It impacts people’s perception of comfort and safety and their willingness to go out,’’ said Aaron Sanandres, CEO of the company.

As infections have spread, European countries have so far gone further than the United States, with restrictions ranging from a full lockdown in the Netherlands to indoor mask mandates in the United Kingdom.

A theater in western England refunded $240,000 in tickets. The Advantage Travel Group, which represents U.K. travel agents, said that business — flights, cruises and package holidays — plummeted fell 40% in mid-December from a month earlier. A diner in central Madrid absorbed cancellations for about half its booked space one week recently.

“As soon as they said work from home, it’s completely emptied,’’ said Sally Abe, a chef at the Conrad Hotel in central London.

On Tuesday, Britain announced that it would provide 1 billion pounds ($1.3 billion) in grants and other aid to help the hospitality industry survive omicron. The government bowed to pressure from pubs, restaurants and other businesses whose income has plunged in the aftermath of public health warnings.

Since the pandemic hit nearly two years ago, it has imposed one economic challenge after another. Economies all but shut down when the virus struck early last year. More than 22 million people in the United States alone lost jobs. Bars, restaurants and hotels were particularly devastated.

But record-high infusions of government spending and, eventually, the rollout of vaccines triggered an unexpectedly powerful recovery, giving many households the confidence and financial wherewithal to resume shopping. And it sparked optimism for the 2021 holiday season: In an updated forecast shortly before omicron emerged as a serious threat, the National Retail Federation said U.S. holiday sales were on track for a record-breaking year.

One fear now is that omicron infections will further disrupt manufacturing and shipping, worsen the supply chain backlogs and keep inflation simmering. It could also increase consumers’ already intensified demand for goods, which would magnify the supply shortages.

“If everybody is freaked out that going to a bar or restaurant is going to land them in a hospital, they may continue to buy goods,’’ said Greene, the Kroll Institute economist. “So that could exacerbate the short-term trend and make inflation worse.’’

On the other hand, she said, “if growth is really dampened (by omicron), that should take the heat off inflation.’’

There are other reasons to think the recovery could decelerate. In the United States, economic aid from federal spending and relief checks is fading. The Federal Reserve is reducing its economic support. China's economy, the world’s second-biggest after the United States, is slowing.

For now, the U.S. bond market is signaling more concern about economic weakness than about runaway inflation: The yield on the benchmark 10-year Treasury note remains at historically low levels, below 1.5%.

Citing omicron and other factors, Oxford Economics has downgraded its estimate of U.S. economic growth for the October-December quarter to a 7.3% annual pace, down from an earlier 7.8% estimate.

“Omicron has been so rampant,’’ said Kathy Bostjancic, Oxford’s chief U.S. financial economist. “And it is hitting in high-density areas of the Northeast. We think it is going to take a pretty big toll on economic activity.’’

That said, it’s also possible that the economy will prove resilient against the latest challenge COVID has thrown at it. One measure of retail traffic shows that the new variant has made little difference — at least so far. For the week that ended Dec. 18, store traffic was up nearly 20% from a year earlier, though down 23% from the same week in the pre-pandemic year of 2019, according to Sensormatic Solutions. For the Black Friday that ended Nov. 27, sales were up 30% from last year.

Arnold Donald, CEO of Carnival Corp., the world’s leading cruise company, said this week that Carnival had experienced “a little spike’’ in cancellations but predicted that it would prove just a short term blip.

So is the traffic at some big retailers. Several hundred people lined up for the opening of the Toys R Us flagship store Sunday at the American Dream mall in East Rutherford, New Jersey.

“We were prepared for a big day, but it was even bigger than we thought,’’ said Yehuda Shmidman, co-founder of WHP Global, which owns Toys R Us.

Abt Electronics in Chicago says it's enjoying a strong holiday season so far, with sales up 10% from a year ago. But Jon Abt, co-president and a grandson of the company’s founder, said he’s noticed that omicron is changing how some people shop. Though fewer customers are entering stores, there’s increasing demand for curbside pickup.

He’s also made changes for workers designed to prevent the spread of COVID: He’s requiring them to stay at the counters or warehouses where they work instead of jumping back and forth to different workplaces.

“I am an optimist,’’ Abt said. “I am not a worrier. This is life. And you have got to roll with the punches.’’