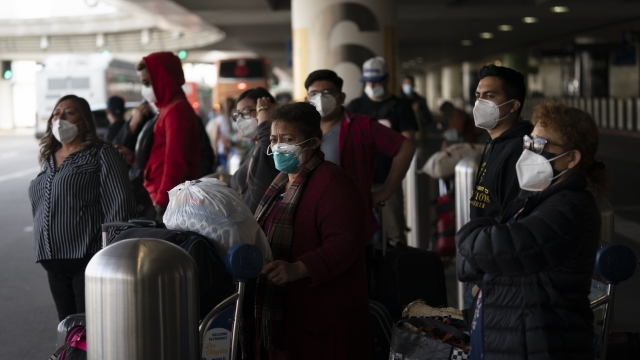 As recently as the end of November, more than 99.5% of coronaviruses were Delta, according to CDC data.

Omicron has raced ahead of other variants and is now the dominant version of the coronavirus in the U.S., accounting for 73% of new infections last week, federal health officials said Monday.

The Centers for Disease Control and Prevention numbers showed nearly a six-fold increase in Omicron's share of infections in only one week.

In much of the country, Omicron's prevalence is even higher. It's responsible for an estimated 90% of new infections in the New York area, the Southeast, the industrial Midwest and the Pacific Northwest.

Since the end of June, the Delta variant has been the main version causing U.S. infections. As recently as the end of November, more than 99.5% of coronaviruses were Delta, according to CDC data.

Scientists in Africa first sounded the alarm about Omicron less than a month ago and on Nov. 26 the World Health Organization designated it as a "variant of concern." The mutant has since shown up in about 90 countries.

CDC's estimates are based on thousands of coronavirus specimens collected each week through university and commercial laboratories and state and local health departments. Scientists analyze their genetic sequences to determine which versions of the COVID-19 viruses are most abundant.

In the week that ended Dec. 11, Omicron's share of new infections in the U.S. increased to 2.9% from 0.4% the week before, the CDC previously reported.

But CDC on Tuesday said they are revising some of the earlier numbers, after analyzing more specimens. The new numbers indicate that about 13% of the infections the week of Dec. 11 were Omicron, and not 3%, CDC officials said.