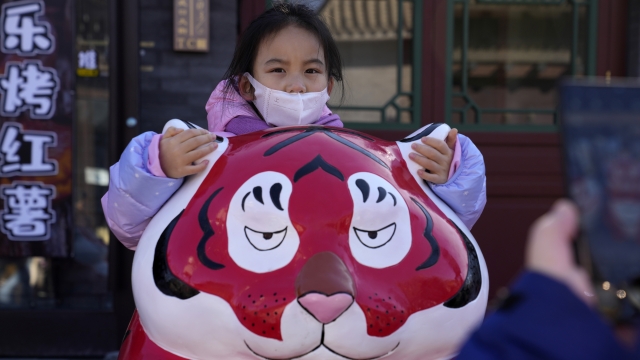 The Lunar New Year, also known as the Spring Festival, is the most important annual holiday in China.

Chinese people rang in the Lunar New Year on Tuesday despite pandemic restrictions, as small crowds gathered at temples to offer traditional prayers for the Year of the Tiger.

At the Lama Temple in Beijing, dozens of people bowed in prayer before the ornate west gate of the Tibetan Buddhist site that was shut because of pandemic restrictions.

Wang Ying, who works at an accounting firm, said praying outside the temple was better than burning incense at home.

"I think sincerity is more important than burning incense sticks," she said, after finishing her devotions.

Wang also said she is looking forward to the opening ceremony of the Beijing Winter Olympics on Friday. Marking the holiday, Beijing residents also took photos outside displays for the Games in the city's central Tiananmen Square.

China has doubled down on its pandemic restrictions ahead of the Olympics. The National Health Commission on Tuesday reported 27 new local cases in the latest 24-hour period, including two in Beijing and seven in neighboring Hebei province.

Participants in the Games are being isolated from the general public to try to prevent any cross-infection. They stay in walled-off hotels and can come and go only in special vehicles that take them to the venues and other Olympics facilities.

As of the end of Monday, 272 people had tested positive among more than 10,000 who had arrived for the Games, Beijing organizers said. Of the positive cases, 67 were athletes or team officials. Those who test positive are taken to a designated hotel or hospital.

Zhao Weidong, a spokesperson for the organizing committee, said that COVID-19 prevention remains a priority.

"Everything is under control," he said at a news conference. "Without a safe Games, there would be no Games."

The Lunar New Year, also known as the Spring Festival, is the most important annual holiday in China. Each year is named after one of the 12 signs of the Chinese zodiac, with this year being the Year of the Tiger.

This year's holiday has seen fewer people return to their hometowns for traditional family gatherings. China's strict pandemic policies can lead to the swift lockdown of towns and cities, as well as suspension of travel wherever clusters of coronavirus cases are identified.

Liu Yuetong stayed in Beijing in case her hometown had a sudden outbreak and her return to work at an ad agency was delayed.

"This is the first time I celebrate the Spring Festival in Beijing alone," she said after her prayers outside the Lama Temple. "I feel a bit lonely. But thanks to technology, I had video calls with my family almost every day."

In Hong Kong, the city's largest Taoist temple, Wong Tai Sin Temple, was closed because of the pandemic, but people gathered to burn incense sticks and offer prayers at smaller temples that remained open.

"I hope that this year is like a tiger, very energetic," said Eric Lee, a visitor to the popular Man Mo Temple. "I hope the economy and everyone's career will be better in the Year of Tiger."

Hong Kong had a surge of coronavirus cases in January and city officials have urged the public to avoid large gatherings. Authorities have also closed schools and banned restaurant dining after 6 p.m.

The number of worshippers at the historic Longshan Temple in Taipei, the capital of Taiwan, was significantly lower as the pandemic enters its third year. Settlers from southern China built the temple in the 18th century to honor Buddha. It also has altars dedicated to Taoist deities.