Brands Are Calling Out Racial Injustice. But Are The Messages Sincere? 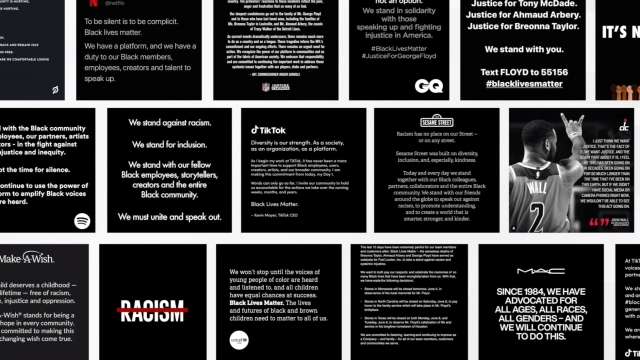 Newsy looked at over 300 official brand social media pages. More than 70% had made a statement against racial injustice.

Protesters for the Black Lives Matter movement are calling for more than policy: They’re calling on companies and big name brands to recognize racial injustice with more than words.

Stephanie Caudle: "I think brands are starting to see like, 'Hey, maybe we aren't doing this thing right.'"

Newsy looked at over 300 official social media pages for companies like Disney, General Mills and Unilever. More than 70% of the brands made a statement calling for racial equality, and roughly half of those statements mentioned specific actions.

Caudle: "It really felt as if it was a copy and paste thing. Like, literally, there was a template that everyone decided to follow."

Professor Dustin York: "I won't call out anyone specifically, but they will have a social media image with a great quote from Martin Luther King Jr. Fantastic! But they just had to take the extra step and put their glossy logo in the bottom right."

Before the most recent calls for racial equality, brands have been "taking a stand" on social issues like LGBTQ rights and women's equality for years. While those earlier statements weren’t without risk, the rise of brand support for racial justice is potentially trickier, though important for younger consumers.

York: "The strategy of brands is going through a major change right now. The strategy of staying in the middle and not taking a side worked very, very well for decades. It built a lot of brands up, a lot of businesses up, specifically for Baby Boomers and Gen X. … Millennials and upcoming Gen Z?  You can't communicate the same way."

Research backs that up that shift. In a 2018 poll from Sprout Social, two-thirds of surveyed consumers said "it's important for brands to take public stands on social and political issues." Around 40% of respondents also said brands were more effective when they followed up statements with actions, such as donations to specific causes.

With that in mind, what brand statements are actually resonating?

Ben and Jerry's statement to "dismantle white supremacy" went viral online, and experts say it's because the company addressed the history of racial injustice and then specifically called out lawmakers to pass legislation "aimed at ending racial violence and increasing police accountability."

As the protests continue, publicist Stephanie Caudle says she's keeping a close eye on the brands choosing to stay silent.

Caudle: "Saying nothing is really, really telling right now. And what it does say to me, you know, as a woman, as a Black woman, is saying that you don't care about Black lives, but you care about Black dollars. And that's really scary to me. "