Poll: 1 in 20 Households Bought A Gun In Response To COVID-19 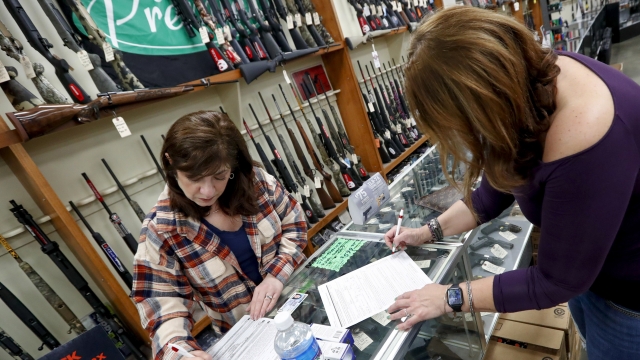 A Newsy/Ipsos survey reveals how some Americans reacted to COVID-19 and the uncertainty brought on by the pandemic.

One in 20 households say they've bought a gun in response to the coronavirus outbreak. That's according to an exclusive Newsy/Ipsos survey showing that many Americans have reacted to COVID-19 and the uncertainty brought on by the pandemic by buying or thinking about buying guns.

"I got a Glock. That seemed like a pretty reliable … very reputable weapon."

Justin Orel is a web developer and former Marine living with his wife and newborn in Kansas City, Missouri.

"I thought about purchasing a firearm for a while. Never really was sure about it. Also I'm not like, I don't know, a gun nut, or like, I don't know, also usually more on the side of like heavier gun controls probably not a terrible thing like better background checks and things like that. … We were just like, well, maybe now is the time just in case, like, something crazy happens or people start losing their minds … Maybe better to have one and not need it than need it and not have it."

Justin isn't alone in that thinking. Newsy's sister stations have collected a range of voices from across the country who have said it's fear of the unknown during this pandemic that has driven them to purchase firearms.

"I have a wife I love. I have four daughters I love — and they're beautiful. So, it only makes sense to have some protection."

"You don't know what's going to happen. There have been talks of shutdowns, lockdowns, statewide, nationwide."

Additionally, our Newsy/IPSOS survey found that a greater number of respondents — one in 10 — have considered purchasing a firearm because of the coronavirus.

This information comes as gun and ammunition sales surged while coronavirus cases continue to grow. Ammo.com, an online ammunition retailer, reported a 777% increase in revenue between Feb. 23 and March 27. And according to the National Shooting Sports Foundation, a firearms trade association, the FBI saw a 300% increase in background checks on March 16th compared to the same day last year.