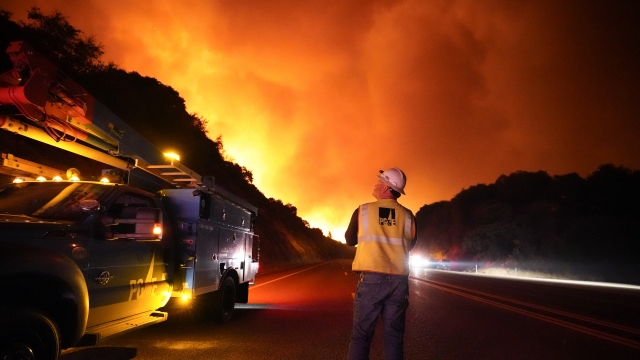 Pacific Gas & Electric says it may black out most customers in the San Francisco Bay Area until Tuesday amid the red flag fire dangers.

More than one million people in California could lose power as the state prepares for hot, windy weather bringing extreme fire dangers.

Pacific Gas & Electric says it may black out most of its customers in the San Francisco Bay Area from Sunday into Tuesday amid the area's red flag warnings.

PG&E says this weekend's weather forecast projects the lowest humidity levels and the strongest winds of the wildfire season. In recent years, these bone-dry, gusty conditions have downed power lines, causing massive blazes in the state.

In 2018, a blaze ignited by PG&E's equipment destroyed the town, Paradise, and killed 85 people. And last October, sparks from transmission lines in Sonoma County destroyed hundreds of homes and forced nearly 100,000 people to flee.

The National Weather Service said the conditions could equal those during last year's Kincade Fire and other blazes in California's famed wine country.

The director of San Jose University's Fire Weather Lab said "On a scale of 1 to 10, this event is a 9. HIstorically our biggest fires are in October. We are in a critical period."

The projected shutoff would be this year's fifth. So far, more than 8,600 wildfires have scorched the state, killing 31 people and burning over 4 million acres. More than 6,000 firefighters are still fighting blazes in the area, while all of the larger fires have now been contained.