One Night Only: A Breakdown Of The 2015 NBA Playoff Picture 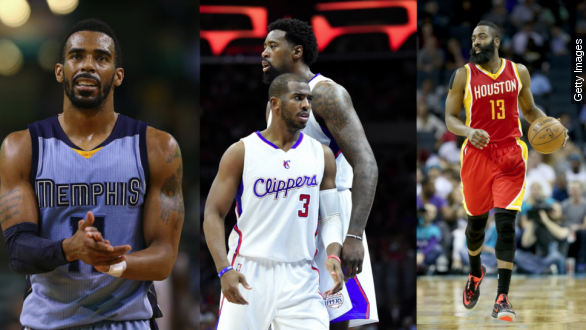 With such a tight race out West, much of the playoff picture will be determined on the last night of the NBA regular season.

The Eastern Conference playoff standings are mostly locked up; the push for last place is honestly more interesting. But there are two teams fighting for this year's eighth spot — the Indiana Pacers and the Brooklyn Nets.

In a double-overtime thriller Tuesday night, the Pacers beat the playoff-bound Washington Wizards 99-95, putting them in control of their own destiny.

But Wednesday night, Paul George and company will head south to take on the Memphis Grizzlies who are 30-10 at home, making them one of the best home teams in the league.

If the Pacers come up short, that will give the Brooklyn Nets a chance to move in. The Nets can only take the eighth spot if the Pacers lose and more importantly, if Brooklyn can get a win against Orlando.

There is a similar battle going on in the West between the New Orleans Pelicans and the Oklahoma City Thunder. The Pelicans control their fate heading into the last night of the regular season.

A win for San Antonio gives the defending champs the second seed, a loss could put them anywhere from number two to number six heading into the playoffs. Which leads us to the particularly confusing round-robin among the Rockets, Grizzlies and Clippers.

A Spurs loss in New Orleans opens up the NBA equivalent of Pandora's box. The Rockets, Grizzlies, Spurs and Clippers could all end up in the second, third, fifth or sixth seeds, depending on who wins tonight and who won head-to-head regular season match-ups.

If you're wondering about the fourth seed, that goes to the Portland Trailblazers — no matter what. With too many losses to move up and a northwest division title under its belt, the Trailblazers are locked in place.

However, if this is all too much for you to handle, don't worry. It'll all be over Thursday morning.

This video includes images from Getty Images and music from Deal The Villain / CC BY NC ND 3.0 and BOPD / CC BY 3.0.