New Ambiguity With Abortion Laws When It Comes To Medical Emergency 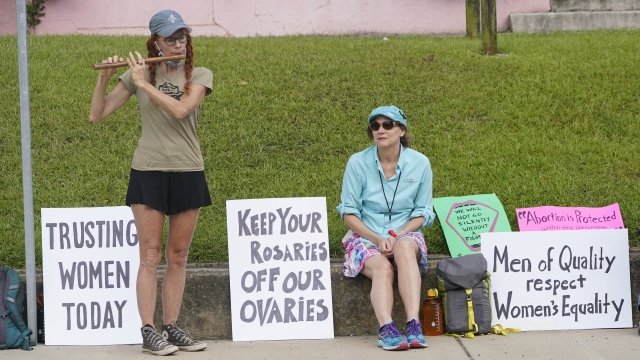 In several states, abortion laws include an exception "in the case of a medical emergency," but there's no definition of what that means.

Andrea Prudente's medical case is a situation we could see more of during post-Roe.

The 38-year-old American had a partial miscarriage while on her baby-moon in Malta.

Her life was in danger and she could get an infection or bleed to death.

Doctors wouldn't give her the surgery she needed to save her life. Abortion is illegal in Malta.

She had to be medically evacuated to Spain.

Doctor Kara Goldman teaches obstetrics and gynecology and is the Medical Director of Fertility Preservation at Northwestern Medicine in Chicago.

"To think about being in a scenario where we can't offer evidence-based care is horrifying," Goldman said.

Illinois is an abortion safe haven, but the Supreme Court ruling already is impacting her patients.

"Yesterday, I talked to a patient. She is considering when to pull her IUD to start trying to conceive with her husband. And we decided that she would wait to pull it until after she returned from Florida," she said.

In several states, abortion laws include an exception "in the case of a medical emergency." But there's no definition of what that means.

"We've created a situation of real ambiguity, where a doctor can't be sure that the situation that looks to them like an emergency calling for action is necessarily one that, you know, that a prosecutor or a government agency or a court would agree," Nelson said.

Ectopic pregnancy is a common example of what doctors consider a situation that needs urgent care. In pregnancy, an egg is fertilized by sperm and becomes an embryo. The embryo should travel down the fallopian tube to the uterus and attach. When it attaches anywhere else, it's an ectopic pregnancy.

"It is a matter of time that fallopian tube will rupture," Goldman said. "And that rupture of the fallopian tube leads to a significant amount of bleeding, and that bleeding may not stop. If that is not taken care of, that woman will die from blood loss. That we learn in residency is never let the sun set on an ectopic pregnancy."

It's the same for miscarriage or if a patient's water breaks early.

Goldman says the longer the wait to consult a legal expert for surgery or medicine, the greater the risk of deadly infection or blood loss for the patient.

"The doctors are going to wait until situations are really dire and nobody can possibly argue about whether there's an emergency. And that's a terrible, terrible development in women's health — in our health care system, period," Nelson said.

Adding to the clock: Legal requirements in states like Kentucky further draw out time. They require a second doctor to sign off on abortion care.

"It's an untenable situation for our health care system," Kentucky OBGYN Dr. Amy Kim said. "And in order to get a second physician signature, someone will have to come in from their home, like be called away from home, come into the hospital, sign off on documentation. That is unsustainable on a long term basis for us."

"The delay in care, in making a decision, is a matter of life and death," Nelson said.

He tells Newsy that for doctors, simply the threat of legal punishment will be taxing.

"There are thousands, tens of thousands of prosecutors out there with a really wide range of political views. Any of these assurances that are given by people at a senior level in the states don't provide any comfort whatsoever about what an individual prosecutor may do," Nelson said.

He adds that medical standards like the definition of "medical emergency" or "health of the mother" should come from clinicians.

As for Andrea Prudente's case, The Associated French Press says Malta's health minister has ordered a review of the country's abortion ban, saying there shouldn't be any part of Maltese law which interferes with doctors saving lives.