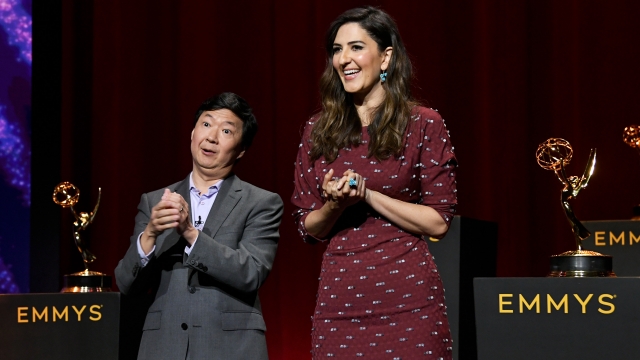 This year, the Academy of Television Arts and Sciences gave out 200 nominations to nontraditional, online platforms.

Watching TV today is a lot different than watching TV five or 10 years ago. Viewers don't need traditional television screens, and they don't have to follow schedules for their favorite shows.

This year, the Academy of Television Arts and Sciences gave out 200 nominations to nontraditional, online platforms. That means streaming services like Netflix and Amazon Prime Video, as well as mobile apps like HQ Trivia or even interactive programs from NASA.

That's a big deal for the TV industry, and to explain why, we need to go back a couple years.

In 2008, the Emmys quietly changed its rulebook and started allowing shows from the internet to compete. Back then, that meant shorter web series like Funny or Die's "Between Two Ferns" or Hulu's "Dr. Horrible's Sing-Along Blog."

["Your so-called Emmys have been hijacked by Dr. Horrible!"]

Shows like that weren't long enough to compete in the Emmys' bigger categories, but they were eligible for some Creative Arts categories.

That changed in 2013 when Netflix entered the scene with 14 Emmy nominations, including one for best drama series. That means it was directly competing with major networks.

["We lost for best drama series. Hmm. Get Jim from the Academy on the phone."]

And that rise in nominations came with some major wins. With "The Handmaid's Tale," Hulu became the first ever streaming company to win best drama, while Amazon Prime Video was the first to nab best comedy with "The Marvelous Mrs. Maisel."

Netflix has yet to win either of those top prizes, but that doesn't mean it's a weak competitor. With 118 nominations overall — and 38 wins from the Creative Arts ceremony — the disruptive company is already one of this year's most decorated honorees.