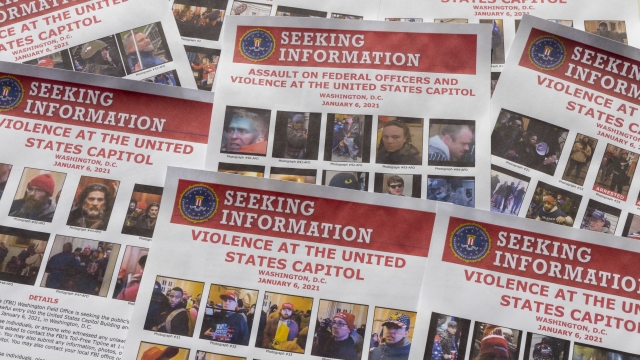 Federal attorneys say more than 725 people have now been arrested. But the FBI still seeks help in identifying more.

A year after the U.S. Capitol insurrection, a community of mostly faceless online sleuths has been poring over images and videos mined from social media. Their mission is to identify rioters like #carharttcowpoke and #cindermagarella.

John Scott-Railton is a prominent researcher who spurred crowdsourced efforts on Twitter.

"What happened after January 6 is that the world saw how many people had some skills that they could point to this problem," he said. "For example, there are people who do nothing but think about retro t-shirts. Well it turns out there was a way for somebody like that to help around January 6. There are sneakerheads, people who are obsessed with sneakers. Turns out those people had a way to help."

The volunteers often share their findings with the FBI.

"There's poetic justice in the fact that some of the worst of the worst, the far-righters who were at the Capitol, got identified by people of color and people from other minority groups and people who they have historically targeted in the past," Scott-Railton said.

He says much of this open-source work on suspects comes from people sitting in their homes, often people who have lost their jobs or loved ones in the pandemic. Some are in other countries, and see the U.S. as a beacon of democracy. And most, like Forrest Rogers, prefer some anonymity.

"There are people that we have identified in January that still have not been arrested," the researcher said.

He's part of a small group called Deep State Dogs. Earlier this year, he identified a rioter who allegedly tasered a police officer.

"Officer Fanone was on national television and mentioned that he had been tasered," Rogers said. "And although our team had already reviewed that footage, we did not see an incident where he was tasered. So I went back and single-framed the footage. And then in a period of one second, in slow motion and single-framing it, I was able to see the suspect reach over with his right arm and taser Officer Fanone on the left side of his neck."

Federal court documents show the FBI has repeatedly cited research from another group of data detectives called the Sedition Hunters.

Extremism expert Heidi Beirich says law enforcement agencies could not have done the work without them.

"There's absolutely no way that the FBI on its own — or even other federal law enforcement agencies — could have collected and sifted through the amount of information that was produced on video around that event," she said.

They do not seek recognition for those efforts.

"The kind of blowback that you're going to get online is massive," Beirich said. "You will be targeted for attack if you are found to be one of the people helping the FBI arrest folks for January 6."

Federal attorneys say more than 725 people have now been arrested. But the FBI still seeks help in identifying more, including at least 250 insurrectionists who they say assaulted police officers.

The challenge today for volunteers behind the screen is unmasking rioters whose faces never showed or are barely visible in images. They don't know just who, and how much, the FBI already has, but they'll keep digitally digging.