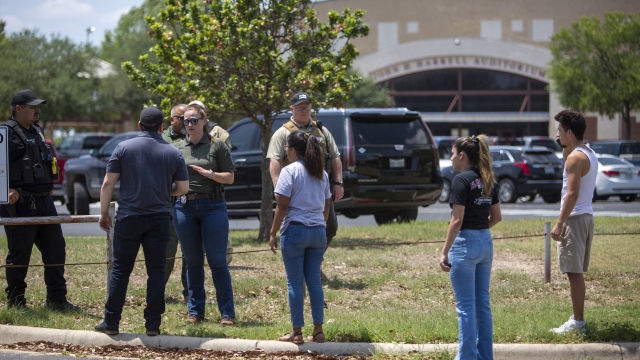 An official said the Border Patrol agents had trouble breaching the classroom door and had to get a staff member to open the room with a key.

Frustrated onlookers urged police officers to charge into the Texas elementary school where a gunman's rampage killed 19 children and two teachers, witnesses said Wednesday, as investigators worked to track the massacre that lasted upwards of 40 minutes and ended when the 18-year-old gunman was killed by a Border Patrol team.

"Go in there! Go in there!" nearby women shouted at the officers soon after the attack began, said Juan Carranza, 24, who saw the scene from outside his house, across the street from Robb Elementary School in the close-knit town of Uvalde. Carranza said the officers did not go in.

Javier Cazares, whose fourth grade daughter, Jacklyn Cazares, was killed in the attack, said he raced to the school when he heard about the shooting, arriving while police were still gathered outside the building.

Upset that police were not moving in, he raised the idea of charging into the school with several other bystanders.

"Let's just rush in because the cops aren't doing anything like they are supposed to," he said. "More could have been done."

"They were unprepared," he added.

Minutes earlier, Carranza had watched as the suspect crashed his truck into a ditch outside the school, grabbed his AR-15-style semi-automatic rifle and shot at two people outside a nearby funeral home who ran away uninjured.

Officials say he "encountered" a school district security officer outside the school, though there were conflicting reports from authorities on whether the men exchanged gunfire. After running inside, he fired on two arriving Uvalde police officers who were outside the building, said Texas Department of Public Safety spokesperson Travis Considine. The police officers were injured.

A Timeline Of The Elementary School Shooting In Uvalde, Texas

The next step is finding out why, and how, this tragedy could have occurred with nothing stopping the shooter in his destructive path.

After entering the school, the suspect charged into one classroom and began to kill.

He "barricaded himself by locking the door and just started shooting children and teachers that were inside that classroom," Lt. Christopher Olivarez of the Department of Public Safety told CNN. "It just shows you the complete evil of the shooter."

All those killed were in the same classroom, he said.

Department of Public Safety Director Steve McCraw told reporters that 40 minutes to an hour elapsed from when the suspect opened fire on the school security officer to when the tactical team shot him, though a department spokesman said later that they could not give a solid estimate of how long the gunman was in the school or when he was killed.

"The bottom line is law enforcement was there," McCraw said. "They did engage immediately. They did contain (the suspect) in the classroom."

Meanwhile, a law enforcement official familiar with the investigation said the Border Patrol agents had trouble breaching the classroom door and had to get a staff member to open the room with a key. The official spoke on the condition of anonymity because he was not authorized to speak publicly about the ongoing investigation.

Carranza said the officers should have entered the school sooner.

"There were more of them. There was just one of him," he said.

Uvalde is a largely Latino town of some 16,000 people about 75 miles from the Mexican border. Robb Elementary, which has nearly 600 students in second, third and fourth grades, is a single-story brick structure in a mostly residential neighborhood of modest homes.