Someone Firebombed One Of North Carolina's GOP Headquarters 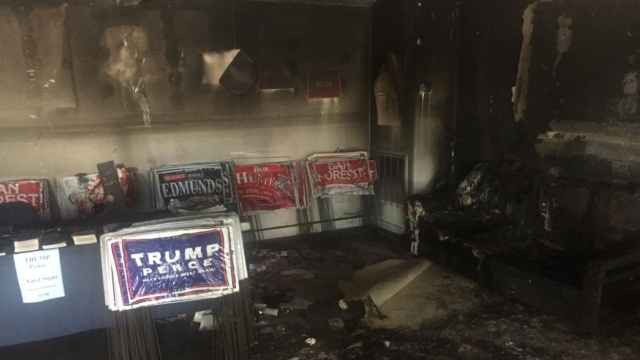 Officials say no one was in the building when the explosive hit.

"Words cannot describe the emotions you feel when you see something like this today," North Carolina Republican Party Executive Director Dallas Woodhouse said.

The Orange County, North Carolina, GOP headquarters was attacked with a firebomb.

Officials say no one was in the building when an explosive was thrown through a window sometime Saturday night.

A swastika was spray painted on a nearby building, and under that someone wrote, "Nazi Republicans leave town or else."

In response, a Democrat-led GoFundMe campaign raised more than $13,000 to help rebuild the headquarters.

The campaign met its original goal of $10,000 less than 40 minutes after it started. Now, the organizer is asking that donations be made toward North Carolina classrooms.

Both presidential nominees took to Twitter to condemn the attack. Hillary Clinton called it "horrific and unacceptable."

Donald Trump suggested Democrats were behind it, but also wrote, "With you all the way, will never forget."

Authorities have no leads on a suspect. The executive director of the office said the organization "will not succumb" to the threat.