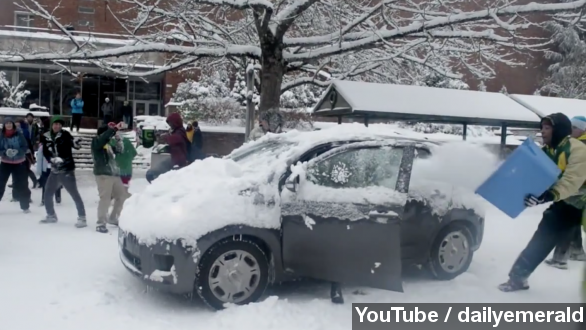 Some students and football players at Oregon are under investigation after a video went viral showing a professor getting attacked with snowballs.

​Students from the University of Oregon are under investigation after a video of what some are calling a "snowmassacre" went viral.

This video posted to YouTube shows students surrounding a vehicle, pelting it with snowballs, and then wait for it.... a huge bucket of snow.

The man in the video is Sherwin Simmons, a professor. When Simmons got out of the car to confront the students, the snowballs kept coming.

The Oregon athletic department confirmed some of the students involved were football players and released this statement from the assistant athletic director.

"The behavior exhibited in the video is, in his words, completely unacceptable and dangerous. We take this matter very seriously and disciplinary actions have already begun."

"Police hope to determine the identities of those who were throwing snowballs, whether they are UO students and whether their actions constitute a criminal act."

Simmons says he is not pressing charges but whether charges should be filed has been a topic of debate.

"I mean I didn't have a problem with them dumping it on him."

"Because it's snow you feel like it's kind of a softer thing. But abuse is abuse. The guy is trying to go home."

"It's harassment." (Via The Daily Buzz)

"Michael says, 'A gang attack like that is assault. Absolutely prosecute'"

"Regina says, 'I don't feel the students should be charged. They are just being kids.'" (Via Fox News)

The incident happened during a snowday for the University. Some Oregon football players are seen here during the day off - acting like more peaceful kids.

We'll keep you updated if and when charges or disciplinary actions are handed down.