Organs For Human Transplants Could One Day Be Grown Inside Pigs 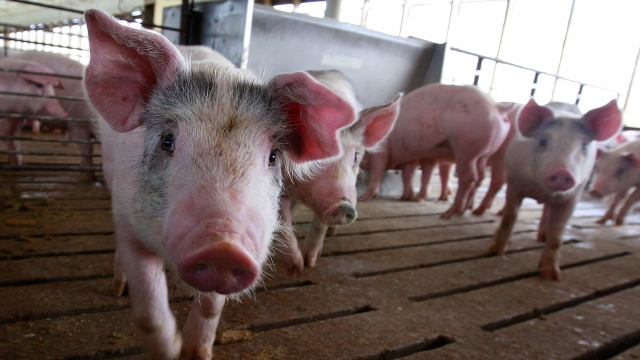 The National Institutes of Health temporarily banned the funding of "chimera" research experiments in 2015.

But a lack of government funding hasn't stopped some researchers from continuing these types of experiments — most notably researchers at University of California, Davis.

So, what is a chimera? In Greek mythology, a chimera was a creature made up of a variety of animals' body parts, such as the head of a lion and the tail of a snake.

The word means something similar in today's world of genetics: It's an organism that's made up of at least two different sets of DNA.

At UC Davis, researchers are implanting human stem cells in pig embryos and allowing those embryos to develop inside the animals for 28 days before removing and dissecting them.

The goal is to one day be able to develop human organs inside the pigs that can later be used for people in need of a transplant.

But just the presence of human DNA inside any animal was enough to cause the NIH to place a temporary ban on funding these experiments.

A New York Medical College professor of cell biology and anatomy told NPR: "If you have pigs with partly human brains, you would have animals that might actually have consciousness like a human. It might have human-type needs. We don't really know."

But researchers conducting these types of experiments say the chances of animals gaining human capabilities are pretty slim, at least for now.

A Stanford University stem cell biologist working with human-sheep chimeras told the MIT Technology Review, "If the extent of human cells is 0.5 percent, it's very unlikely to get thinking pigs or standing sheep."

The NIH says it won't bring back funding for chimera projects until it's had the chance to look into the ethical implications and animal-welfare concerns associated with the research.