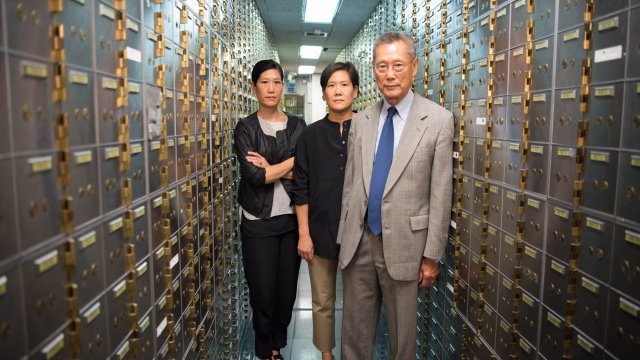 "Abacus: Small Enough to Jail" documents the trial of the only U.S. bank indicted after the financial crisis. Newsy talked to director Steve James.

Acclaimed documentary filmmaker Steve James finally received an Oscar nomination for best documentary feature. In the eyes of many critics, the director of "The Interrupters," "Life Itself" and "Hoop Dreams" had been — until now — majorly snubbed by the Academy Awards.

But that's old news. James' latest film, "Abacus: Small Enough to Jail," is one of five contenders for the biggest documentary prize of the year. The film tells the little-known story of the only U.S. bank prosecuted for mortgage fraud in the wake the 2008 financial crisis. That bank, Abacus, is a small family operation that's been serving Chinese-Americans in New York's Chinatown for decades. The film follows the Sung family for months as they fight their case in court to ensure their bank survives.

Besides enjoying the Oscar ride, James is also working on his upcoming 10-part docu-series "America to Me." James and his crew spent a school year following the lives of a dozen students, teachers and administrators in one of the most diverse and progressive public high schools in the Chicago area. The first five episodes recently premiered at the Sundance Film Festival, where Starz network acquired the series for a fall release.

James talked about his career and his Oscar-nominated film with Newsy's Ben Schamisso.

BEN SCHAMISSO: Beyond the legal battle and the financial crisis, what themes does "Abacus: Small Enough to Jail" touch on?

STEVE JAMES: Within that, it touches on the unequal application of justice in America, which is a real problem in this country. Something like 98 percent of the cases don't go to trial; they result in guilty plea bargains. I don't believe 98 percent of the people charged in this country with crimes are guilty, right? So what that means is there are people who don't have the wherewithal to fight back, and they plea because it seems like the easiest way to deal with it. Well, on this case, you had a family that had the wherewithal to fight back.

Why didn't the big banks get prosecuted? Why is this little bank, when it had no relationship whatsoever to the financial crisis and it's kind of the mere opposite of the big banks in every respect. They are small, they discovered the fraud themselves and reported it and tried to root it out themselves. And yet, they were put on a trial, and the big banks who did egregious acts of fraud that nearly crashed the world economy, they walked away with bailouts and fines.

I think it's also a significant story about family. I've had people come to me at the end of festivals, particularly people on the Asian community and especially in the Chinese-American community, have said, you know, that's a portrait of family life I can relate to. I think we have this stereotype of Asian households  and Chinese households where everyone sort of kowtows to "dad" and no-one would have dared contradict or disagree with the father; nothing could be further from the truth in the story.

Looking Back To Look Ahead: A New LA Riot Doc Uncovers A Hidden Past

Director John Ridley wove several perspectives together for his film "Let It Fall: Los Angeles 1982-1992," which explores the genesis of the LA riots.

SCHAMISSO: You feel for them in all these meetings after their days in court at the restaurant, family meetings, and they seem to completely ignore the camera. And I want to know, as a director, how do you achieve that level of trust?

JAMES: In general, people don't forget about the camera so much as they get to a level of comfort with it being in the room. And how do you achieve that? I think a lot of that is due to relationship-building. I actually believe it's important that your subject enjoys your company, you know, enjoys having you around to some degree. They're not going to always want you around for sure. But you gotta be someone they enjoy spending time with. And you hope you get to a place where it feels like this is a film you're making with them, not just on them.

And only one camera. I'm a big believer in single-camera shooting because when you get multiple camera in a real situation, it can start to feel like a production, like reality-TV, which we want to avoid at all costs.

SCHAMISSO: It seems to me that compared to a lot of your other documentaries, this was a more investigative piece.

JAMES: Yes, pretty early on, you get that we are telling this story through the eye of the Sung family and that we are sympathetic to them. We're clear about where our allegiances lie, but at the same time, we didn't want to be let off the hook to present the case against them and present it as fully and completely as possible, which is why, we really went out of our way at great effort to get [New York County District Attorney] Cyrus Vance Jr. in the film, to get Polly Greenberg, the head of economic crime, in the film and also to get one of the two jurors who felt the Sung family was guilty.

SCHAMISSO: As a journalist, I thought it was really inspiring to see the kind of access you managed to have and that all these people agreed to talk to you.

SCHAMISSO: How does it feel to finally have your film nominated by the Academy Awards for best documentary feature?

JAMES: It feels really good because of the story and the fact that the story would have disappeared, literally, I think without us doing this film. I'm not done with my career. So, I don't want to say culmination, but it would be a great thing to get and to have, but you know what? Whatever happens, happens. I'm just enjoying where we are. I get to spend more time with the Sungs, which is always delightful, and we get to ride this crazy journey a little further.

SCHAMISSO: I didn't think that being nominated means you get to bring the characters of the documentary to the Oscar ceremony and continue that experience with them. That must be great.

JAMES: It's wonderful. I've had a lot of great experiences over the years with subjects of films. It's one of the fun parts. Once the film is done — if they like the film, of course — to travel around and experience it with audiences with them is a delightful part of it, and none more delightful than with this family, as entertaining as they are in the film, they are still. And with the added thing, is all that stress and strain from the trial is gone now, so they can relax and appreciate it all the more.