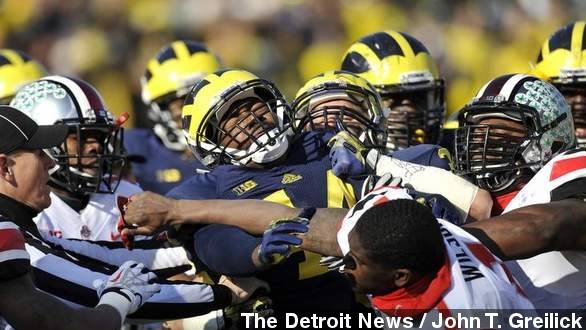 Officials ejected three players from the Ohio State-Michigan rivalry game after a fight broke out in the first half.

It's rivalry week in college football, and tempers flared during the 110th Ohio State-Michigan game as a nasty brawl led to three players hitting the showers a little early.

"Did we say that they're bitter rivals? This fight breaks out in the second quarter; three players ejected — two from Ohio State, one from Michigan." (Via NBC Sports)

The fight started right after a kickoff return by Ohio State's Dontre Wilson, who somehow lost his helmet during the skirmish. Officials tossed Wilson, a running back; his teammate and starting right guard Marcus Hall; and Michigan linebacker Royce Jenkins-Stone. (Via USA Today)

A writer for Deadspin points out, "Always smart to be throwing punches at dudes wearing helmets while you, yourself, are not wearing a helmet," referring to a hatless Wilson. He continues, "Hall wasn't even involved with the play, by the way; he decided to enter the fray from the bench area." Nice.

Something else of note: Marcus Hall's two-finger salute while exiting Michigan Stadium, aka "The Big House." Hey, if you're leaving the game early, why not give your rivals something to remember you by ... no matter how boneheaded it might seem? (Via Fox Sports)

Ohio State squeezed out a 42-41 win that went down to the wire, but the fight might've cost it two key players ahead of next week's Big Ten Championship game.

WWJ-TV reports the ejections could result in suspensions for Wilson and Hall, both big contributors to Ohio State's success this season.

Ohio State puts its unbeaten record on the line against the 11-1 Michigan State Spartans next Saturday during the conference championship game.