The Power Of Puppy-Dog Eyes Explained By Science 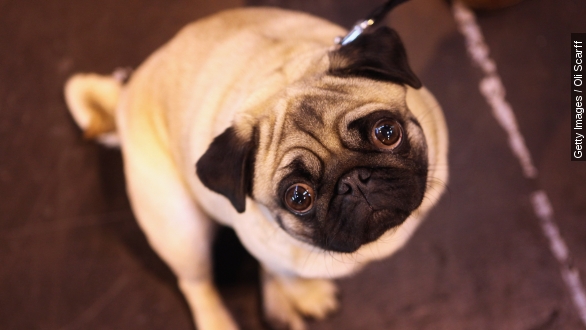 Researchers found a spike in oxytocin occurs in both humans and dogs when they gaze into each other's eyes.

Just look at that face. Could you ever say no to those puppy dog eyes?

Turns out, you probably can't. Japanese researchers say they've learned the reason we can never seem to resist those adorable eyes – gazing into them causes a spike in the hormone oxytocin.

Sometimes called the "love hormone", oxytocin is the chemical in the brain that, when released, helps people bond with each other. Most notably, mothers and their children.

What's interesting about this new study, according to NBC, is that it proves levels of oxytocin increase in both humans and the dogs. It had previously been believed that that hormone only rose in people.

The Japanese research team conducted several experiments to come to that conclusion. In the first test, they had 30 dogs and their owners interact for 30 minutes and afterward collected a urine sample from both.

Those with the highest levels of the hormone in their urine had actually gazed at each other for a significant period of time, which The New York Times said the scientists defined as "100 seconds in the first five minutes of the encounter."

In the second test, researchers used a nasal spray to give the dogs an extra boost of oxytocin. It was discovered the female dogs looked at their owners for a longer period of time than the male dogs, resulting in a hormone increase in the female dogs' owners.

While the study didn't have an explanation for why the female dogs gazed longer than the male dogs in that second experiment, the researchers do believe that when dogs became domesticated they somehow learned their ability to love. (Video via CBS)

That belief was further cemented when the same experiments were tested on a set of wolves and their handlers and the wolves couldn't hold a gaze. Dogs, of course, are thought to have evolved from wolflike ancestors thousands of years ago.

"Evolution is a tinkerer ... and when humans and dogs came up with this even stranger, more unique relationship, it looks like oxytocin got co-opted for that as well," a Stanford University neurobiologist told the Los Angeles Times.

But not everyone is on board with this newly-discovered connection. NPR spoke with a psychologist from Arizona State University who notes that oxytocin can also be associated with feelings of emotional isolation and aggression in animals.

Wouldn't it just be great though to think your dog is staring at you because he or she loves you, and not because they want whatever food you're currently eating?