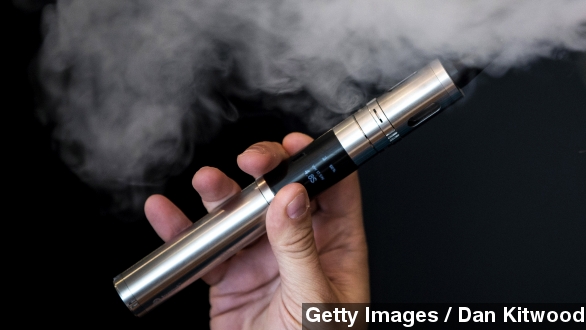 After a year-and-a-half of controversy and health concerns, "vape" emerges victorious as Oxford Dictionaries' Word of the Year.

The word is both a noun and a verb. As a noun, it refers to the electronic device — usually an e-cigarette — used to vaporize a substance for inhalation. As a verb, it means to inhale and exhale the vaporized substance produced by the e-cigarette. (Videos via YouTube / PDX1K, YouTube / Abby Vapes)

Oxford Dictionaries' editorial team says it chose "vape" because of the word's growing popularity over the past year and a half. Media interest in London's "The Vape Lab" — the first U.K. e-cigarette coffee shop — and controversy surrounding the health and safety of vaping have driven the word into the mainstream.

As it turns out, though, the word has been around since the 1980s. Oxford describes an article written in 1983 where the author, Rob Stepney, described an e-cigarette. He even went on to coin the term "vaping!"

As media outlets, health organizations and scientific studies continue to debate the benefits and pitfalls of e-cigarettes, "vape" will likely continue its popular streak well into the coming year. (Videos via BBC, CNN)

Oxford shared a shortlist of words in the running for Word of the Year, including the affectionate term "bae," the tech term "contactless," referring to wireless payments and "budtender," which is essentially a marijuana bartender. You can learn more about "vape," and check out the rest of the shortlist on Oxford's OxfordWords blog.