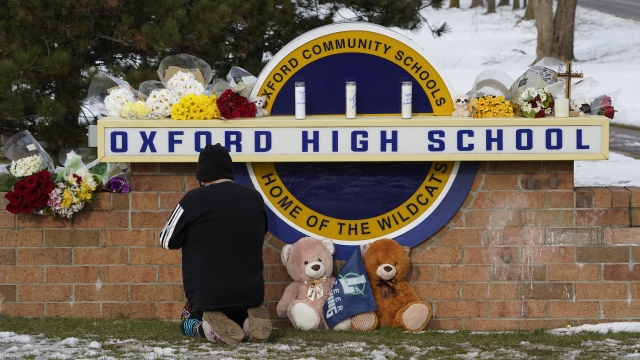 The teen is charged with 24 counts as an adult — including terrorism and murder — for the Nov. 30 shooting at Oxford High School that left four dead.

The 15-year-old appeared virtually during a court hearing on Wednesday.

He's charged with 24 counts as an adult — including terrorism and murder — for the Nov. 30 shooting at Oxford High School that left four dead.

Nearly two months later, new details are emerging in what some victims are claiming were missed red flags by the school and administrators leading up to the tragedy.

A lawsuit filed on behalf of two sisters who attend Oxford alleges the teen brought a bird's head in a Mason jar into the boy's bathroom at the school three weeks before the shooting.

According to that same lawsuit, the day before the massacre, the suspect allegedly brought ammo inside school premises and researched ammunition on his phone in class.

Court documents show the teen's drawings on his math homework on the day of the attack.

On the drawing: a gun, a student shot twice, a bullet and a laughing sign.

A teacher flagged the drawing to the office. The teen's parents were called to the school, but refused to take him home. He was returned to class.

"And they're told that immediate therapy is needed. Immediate as in that day," the prosecutor said. "They resisted, instead asserting that they couldn't possibly take him out of school because of work. We have since learned that Jennifer Crumbley's employer would have gladly given her the day off, and she did not have any meetings scheduled until later in the day."

The new developments don't stop with the teen.

The Oakland County prosecutor claims his parents, Jennifer and James, withdrew thousands of dollars in cash, sold their horses and bought burner phones after their son had been arrested.

They are both in jail on $500,000 bond each. Both face four charges of involuntary manslaughter.