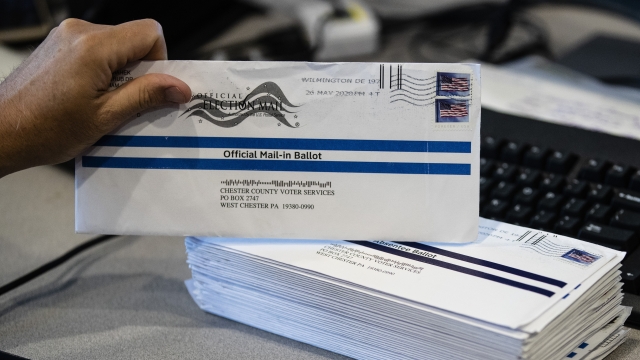 Pennsylvania Republicans are trying to block a state order extending deadlines for mail-in ballots by 3 days after election day.

Republicans in Pennsylvania are asking the U.S. Supreme Court to block a state order to extend the deadlines for mail-in ballots. The high court's eventual ruling could end up discounting several votes in a key swing state — one President Donald Trump took in the 2016 election. It will be the first election-related case to be taken up by the court since the death of Justice Ruth Bader Ginsburg.

Pennsylvania's Democratic Party asked the state court to allow mail-in ballots to be cast and counted three days past Election Day. The court ruled in the party's favor earlier this month, saying those ballots must be postmarked by the day polls close and received by 5 p.m. on November 6th.

The court cited warnings about possible delays at the Post Office as a reason for its decision. Democrats in Pennsylvania are reportedly requesting mail-in ballots at a nearly 3-to-1 ratio over Republicans.

The GOP is hoping the Supreme Court will follow a ruling made on Sunday by a federal appeals court in Wisconsin. That decision halted a lower court order that would have allowed ballots to be counted six days after the election.

Republicans said the state court's decision would "[inject] chaos and the potential for gamesmanship into the election."

President Trump has often tried to discredit mail-in voting by saying it's prone to fraud. But there's little evidence to support his claim. Still, the president recently told a crowd in Harrisburg, Pennsylvania, that the way he'd lose the state would be if Democrats "cheat on the ballots."