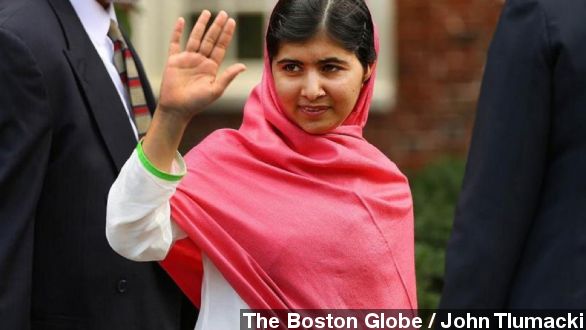 A federation of private schools say the memoir undermines Pakistan and doesn't show enough respect to the Prophet Muhammad.

Just one month after 16-year-old education activist Malala Yousafzai released her memoir, thousands of Pakistani private schools have banned students from reading it.

A chairman for the All Pakistan Private Schools Federation said his group is banning Yousafzai's book because "through this book, she became a tool in the hands of the Western powers." (Via Al Jazeera)

After a Taliban member shot the teen activist in the head more than one year ago, she has risen to global fame for her inspirational speeches about education. (Via France 24)

She's delivered that message through a speech to the United Nations and in an appearance on "The Daily Show."

"Education is the power for women, and that's why the terrorists are afraid of education. They do not want women to get an education because then women would become more powerful." (Via Comedy Central)

And her story earned her a meeting with President Obama as well as a Nobel Peace Prize nomination. (Via The Telegraph)

But in her homeland, that attention has come with criticism. Some conspiracy theorists claim her shooting was staged by the West to create a heroic poster-girl for anti-Pakistan propaganda. (Via ABC)

In Pakistan, the majority of children in school attend private facilities due to the poor quality of public schools. The decision to ban Yousafzai's book affects more than 40,000 schools in Pakistan. (Via The New York Times)

The group said the ban was mainly motivated by Yousafzai failing to show enough respect for Islam.

When she addressed the Prophet Muhammad's name in the book, she didn't use the abbreviation "PBUH," which means "peace be upon him." Many parts of the Muslim world consider that addition essential. (Via Parade)

The group also criticized Yousafzai's mentions of Salman Rushdie, citing the novelist's controversial statements about Muhammad in one of his books. (Via The Guardian)

The group is calling on the Pakistani government to ban the book from all school curriculum. But the government so far has remained neutral on Yousafzai's message. (Via PBS)

Yousafzai has responded to criticism before, saying she is not a tool of the West and that she is proud to be a Pakistani.