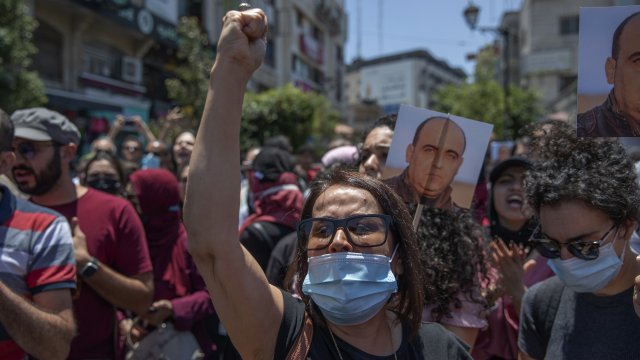 Long-simmering anger at the Palestinian Authority has intensified after death of critic and ensuing crackdown on protesters.

Public anger is rising in the West Bank. Not against Israel, but against the Palestinian Authority, or PA.

For days, protesters have taken to the streets, enraged by the death and alleged beating of an outspoken critic in police custody.

The PA said Monday it has launched an investigation into his death. But the critic's relatives said Tuesday they'll only accept the result of an international and impartial investigation.

"There is really no way to excuse what happened and the responsibility of the Palestinian police force in conducting such a brutal interrogation that led to someone's death," said Khaled Elgindy, the director of program on Palestine and Palestinian-Israeli affairs at the Middle East Institute.

Frustration against the PA and its president, Mahmoud Abbas, is not new. But it has intensified after the death of the critic, Nizar Banat, and the ensuing crackdown on protesters.

"We're all watching videos of police both in uniform and plainclothes, who are beating protesters, who are snatching the phones of protesters who are trying to document what's happening. And it all looks quite brutal," said Elgindy.

In April, Abbas called off the first Palestinian elections in 15 years, reportedly because he feared losing, again, to Hamas.

The Islamic militant group seized power in Gaza in 2007 shortly after winning a landslide election. Since then, Abbas' authority has been confined to parts of the West Bank.

He has been criticized for becoming increasingly authoritarian.

At the funeral for Banat, the critic, mourners held the flags of Palestine and Hamas.

Hamas' popularity has dramatically surged since the recent Gaza war.

"Hamas to a lot of Palestinians at least looks like they're doing something to create a cost for the occupation, whereas Mahmoud Abbas and his leadership have been quite passive," said Elgindy.

But with the Palestinian Authority clinging to power in the West Bank, it's unclear how Hamas can achieve its goal of becoming the sole leader of the Palestinian people.

"I think a lot of Palestinians would like to promote a new leadership that is much more reform-minded, that is more accountable, that is more representative than either of these two leaderships that they've had," Elgindy said.

The U.S., Israel and the E.U. prefer the unelected PA to Hamas — which they consider a terrorist group.

They have invested for decades in the PA to keep the region stable.

But as the Gaza war, Jerusalem tensions and the uprising in the West Bank shows, that approach seems increasingly unstable.