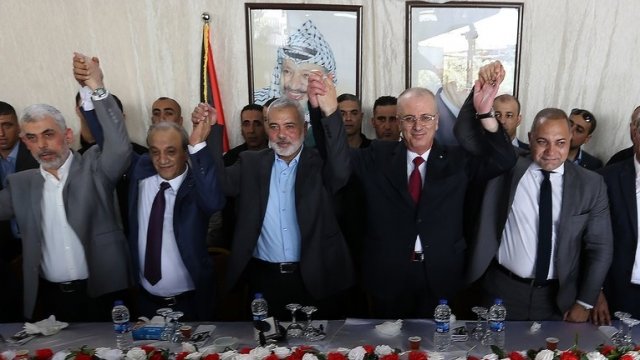 The Palestinian Authority is set to take over responsibilities in the Strip after Hamas agreed to dissolve its administrative committee.

The Palestinian Authority's premier received a warm welcome during his visit to the Gaza Strip as his ministers are set to take over governing responsibilities there.

Prime Minister Rami Hamdallah arrived in Gaza on Monday to flag-waving crowds. He met with Hamas leader Ismail Haniya after giving a speech on the importance of unifying the Strip and the West Bank in the quest for a Palestinian state.

Hamdallah will oversee the Authority's assumption of administrative responsibilities in Gaza. Hamas once governed the region jointly with the Fatah political party, which now leads the Authority. Hamas ousted the Fatah party in 2007 after winning elections the year before.

Palestine was admitted despite Israel's latest attempt to block it.

But in September, Hamas announced it would dissolve its administrative committee in the Strip and seek a unity government "to assume its duties immediately."

The two groups have been down this road before, though. Since the 2007 split, multiple reconciliation attempts have failed.

Notably, a 2011 reconciliation pact deteriorated over a disagreement over who would be prime minister. And a similar effort in 2014 tanked after Israel and Hamas started a brief war in Gaza.

The Gaza Strip is still recovering from that war; nearly half its residents are unemployed, and a blockade on Gaza imposed by Egypt and Israel after Hamas took control remains in place.

But even amid economic turmoil, analysts fear Hamas leaders won't be willing to disarm.

Hamdallah said the Authority would take over the Strip's day-to-day governance as well as "security responsibilities." It's not yet clear what will become of Hamas' armed brigades, a sticking point for Israel.

Gaza is home to around 2 million people.