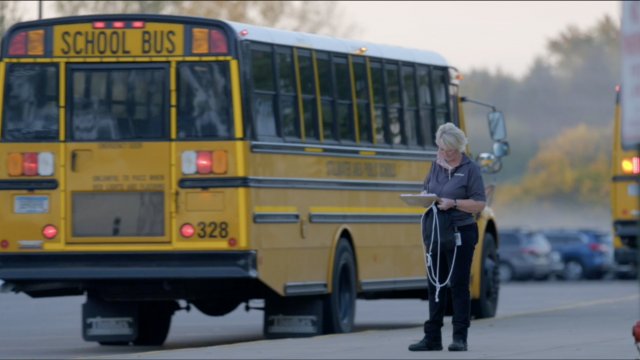 In the latest installment of Newsy's "Two Americas" series, one family details the stress bus shortages have put on them amid the pandemic.

This was supposed to be the school year where everything went back to normal.

Parents pushed through a year of sitting their kids in front of laptops, overseeing virtual learning, while trying to somehow finish their own work.

Instead, COVID concerns, shrinking budgets and staff shortages across the board have brought a new set of obstacles.

Newsy's "Two Americas" series looks to shine a light on the America we don't often discuss, like this story from Stillwater, Minnesota, a place named for calm.

A few miles from downtown, Jorlene Leslie is calm too.

"Some days are great days," Leslie said. "Other days, it's like, I just want to go home and have a meltdown."

On Labor Day Weekend, Leslie and parents across Stillwater learned the district wouldn't have enough buses to pick up every child. The company it hires for bus service couldn't find enough drivers.

Leslie leaned on foundations until the COVID-19 pandemic upended them. She had a job with one of Minnesota's largest companies, then became one of thousands they've laid off since 2020. She moved to a steady school district that, right now, can't provide a basic service. She's a single mom raising four kids.

"I do everything myself," Leslie said. "I drive my kids to and from school. I pick them up, sports, all of that, pay all their expenses myself, I'm a full-time mom, and I work, when I can. It's just messy. Everything is messy."

The bus driver shortage has stretched across Minnesota, from Stillwater all the way to Minneapolis. It's affected school districts nationwide, but it's far from the only challenge forcing parents to stretch, in a school year most had hoped would bring a return to normal.

Some districts can't find teachers, and others can't find paraprofessionals. Others can't fill their lunch menus, even as the number of students needing free meals grows. One psychologist in the Twin Cities points to the changes the community has seen.

"The reality is there's no evidence that we will ever get back to the way it was," said Lewis Zeidner, Ph.D., assistant director for clinical triage and transition services for M Health Fairview. "Our families, our communities, they often say it takes a village to raise children. Well, our villages have shrunk. We're more isolated than we were. We're less able to engage in our community."

That isolation only amplifies the damage. A study by McKinsey found the 2020-2021 school year left students, on average, five months behind in math and four months behind in reading. More than 35% of parents said they were very concerned about their children's mental health, including Leslie.

She drops her son at high school, then her daughter at junior high. With traffic, a few miles can sometimes take an hour, causing her daughter to be late to class.

"Usually I'll text my daughter, like, 'How are you doing?' 'Are you doing OK?' And sometimes she wants to get picked up from school because she doesn't want to be at school," Leslie said.

In early September, Stillwater Area Public Schools sued its bus company, alleging breach of contract. In early November, the district redrew bus routes to pick up more students but took away the option for parents of early dropoff. There's no true normal.

"I can see it all over my kids' faces when they walk in," Leslie said. "They're stressed. They don't want to go to school, and no child should feel like that."