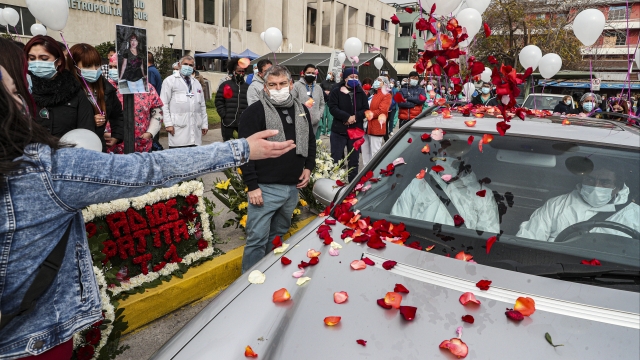 Latin America and the Caribbean surpass 3 million Coronavirus cases, with Brazil, Peru, Chile and Mexico ranking among world's most impacted.

In Chile, a siren of mourning wails for a fallen hospital nurse, lost to COVID-19. She is eulogized as a martyr in the pandemic ravaging Latin America, with no let-up in sight.

Latin America and the Caribbean this week surpassed 3 million Coronavirus cases. And four countries — Brazil, Peru, Chile and Mexico — rank among the top eight in the world in known infections.

On Tuesday, Pan American Health Organization director Carissa Etienne said the pandemic is reaching "staggering proportions" in the region, with a 20% spike in coronavirus cases in just one week. That amounts to more than 735,000 new infections.

"What we are seeing now is not a second wave. This is still the first wave and I'm afraid it continues to grow. This wave is moving within each country, affecting areas that have not had many cases before. And this trend is concerning," Etienne said.

Chile is a case in point. The country of just 19 million people now ranks sixth in the world in coronavirus cases, with more than 300,000 infections and 6,400 deaths.

Peru on June 30 eased quarantine restrictions in 17 of its 24 provinces, as President Martín Vizcarra warned the populace to wear masks and not to just go out as if "the virus has disappeared." He said it is Peru's reality now.

"The virus will not disappear until the efforts from science find a vaccine. In the meantime, we will live with it," Vizcarra said.

Since June 1, deaths have nearly tripled in Mexico, with its 32,000 fatalities ranking fifth in the world and its nearly 270,000 infections eighth. Mexico City, once fast reopening, is imposing new lockdowns.

And this is the scene in Brazil, which ranks second behind the U.S. in COVID-19 cases and deaths. President Jair Bolsonaro, who notoriously downplayed the pandemic, tested positive for the virus this week. But these protesters, holding photos of lost loved ones, aren't about to give him a pass.