Papal Support Is Just A Piece Of The Climate Puzzle 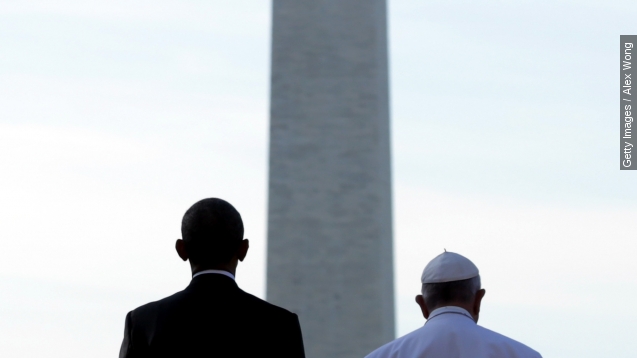 There is an unusual degree of policy to Pope Francis' first visit to the U.S.

In Wednesday's speech at the White House, the pontiff made the case that combating climate change is a moral imperative.

"Humanity has the ability to work together in building our common home. As Christians inspired by this certainty, we wish to commit ourselves to the conscious and responsible care of our common home," Pope Francis said. (Video via The White House)

It's giving climate watchers a good feeling about the upcoming Climate Change Conference in Paris, where the hope is nations participating will come to a new agreement to limit carbon emissions.

But whatever does come of the Paris talks is going to be the first step in a long process of addressing the state of the climate.

Any agreement won't stop worldwide emissions outright, and even if it did, studies suggest it would take 1,000 years to reverse their effects on the climate.

The pope, meanwhile, will keep up the pressure. He's bringing up the climate again Thursday during a speech before a joint session of the U.S. Congress. (Video via The Vatican)