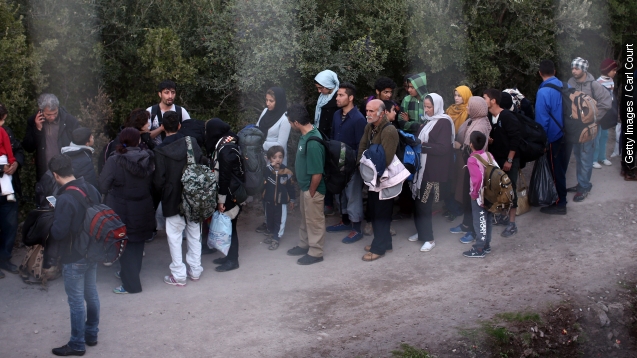 The international response to the refugee crisis has been shaken by the terrorist attacks in Paris.

A passport appearing to belong to a Syrian refugee was found near the body of one of the terrorists that attacked Paris Friday night. There's so far been no confirmation the passport actually belongs to the terrorist.

But just the suggestion that attackers gained entry to France by posing as refugees is enough to further complicate the already divisive refugee crisis.

And now, Poland says it's closing its doors to refugees and calling for a revision to the EU's current refugee policy. The country's incoming minister for European affairs said, "Poland doesn't see the political possibilities to implement a decision on the relocation of refugees.” (Video via Telewizja Republica)

On the other end of the spectrum, Canada's new Prime Minister Justin Trudeau made it clear his country isn't changing its refugee intake. The country is set to accept 25,000 Syrian refugees this year. (Video via CBC News)

So far, the United States' plan to allow 10,000  Syrian refugees enter the country remains unchanged, something politicians are calling into question. Republican presidential candidate Senator Ted Cruz called for a complete "halt to any plans to bring refugees that may have been infiltrated by ISIS to the United States." (Video via The White House)

The world leader likely to face the most pressure to alter refugee policy is German Chancellor Angela Merkel, a proponent of less restrictive immigration policies. Merkel made it clear Saturday that she's not backing down. (Video via Bundesregierung)

She said, "Let us reply to the terrorists by resolutely living our values and by redoubling those values across all of Europe — now more than ever." (Video via Bundesregierung)