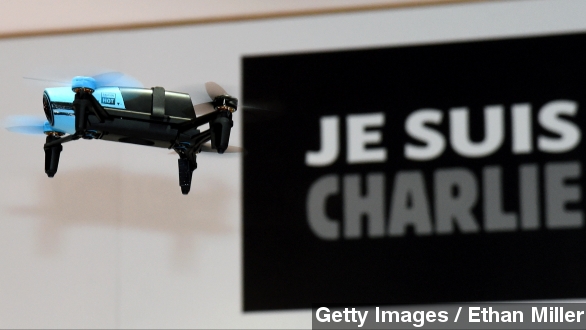 Police are having trouble tracking down drones in Paris, which are causing security concerns at the city's tourist destinations.

But flying a drone through Paris right now is a slightly more risky proposition.

That's because the city is on alert following terrorist attacks there in January, which left 20 people dead. (Video via BBC)

On Tuesday night, police reportedly chased down one drone through eastern Paris before it was recovered by four men who fled in a car. Police were unable to continue the chase due to traffic. (Video via France 2)

That was just the latest in more than a dozen sightings of drones hovering around popular tourist destinations within Paris, like the Eiffel Tower. (Video via CNN)

Flying drones like that within the city of Paris is illegal and accompanied by substantial fines.

Just last week authorities fined an Al Jazeera journalist some 1,000 euros for flying a drone in the city. He says he was working on a story about the drones.

Most of the other drones spotted over the city haven't been tracked down, adding to fear about their possible origins, especially in an atmosphere of heightened security. (Video via The Verge)

The problem is the technology is very accessible and readily available — more than 100,000 drones were sold in France in 2014 — which vastly opens the field of who could be piloting them.

Military expert Jean-Marc Tanguy told Euronews: "We can't decipher whether we're talking about professionals or geeks. It could just be teenagers who are capable of operating these little engines that could be found in many shops."