In The Past, Presidential Inauguration Addresses Have Been About Hope 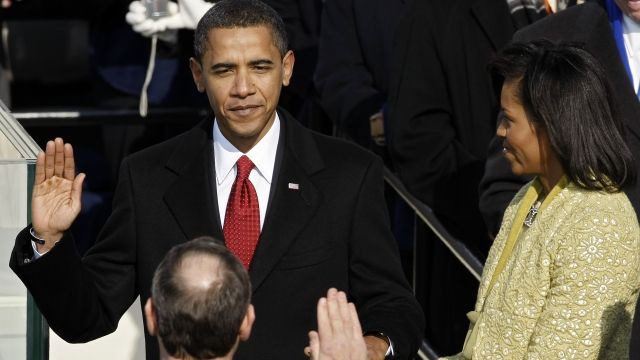 Incoming presidents have all talked about their hopes for the future when addressing the country on Inauguration Day.

Presidential inaugurations often share a common theme: hope. Here's a look back at some of their most inspiring quotes.

Bill Clinton, 1997: "Let us shape the hope of this day into the noblest chapter in our history. Yes, let us build our bridge."

George W. Bush, 2001: "The peaceful transfer of authority is rare in history, yet common in our country. With a simple oath, we affirm old traditions and make new beginnings."

Former Presidents Are Coming Around On Attending Trump's Inauguration

John F. Kennedy, 1961: So let us begin anew — remembering on both sides that civility is not a sign of weakness, and sincerity is always subject to proof."

Ronald Reagan, 1985: "We believed then and now there are no limits to growth and human progress when men and women are free to follow their dreams, and we were right."

Barack Obama, 2009: "We cannot help but believe that the old hatreds shall someday pass, that the lines of tribe shall soon dissolve, that as the world grows smaller, our common humanity shall reveal itself and that America must play its role in ushering in a new era of peace."

George H.W. Bush, 1989: "This is a time when the future seems a door you can walk right through into a room called tomorrow."