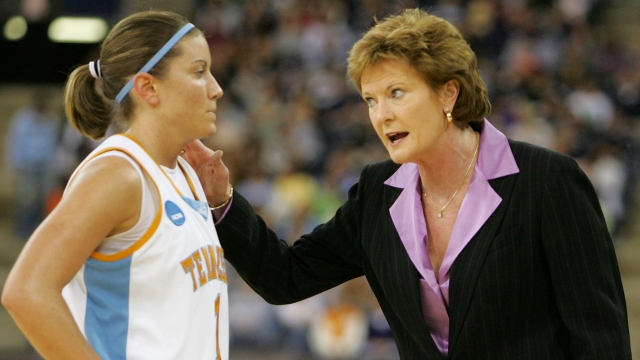 The former Lady Vols coach stepped down in 2012 after being diagnosed with dementia.

Pat Summitt, the winningest coach in NCAA basketball history, has died at age 64.

Summitt's health had reportedly worsened recently. Her family previously told the Knoxville News Sentinel that they were "preparing for the worst."

The legendary University of Tennessee basketball coach stepped down as the Lady Vols' coach in 2012, several months after announcing she'd been diagnosed with early onset dementia.

"It was hard because I didn't want to, but I felt like I needed to step down," Summitt told ABC.

Summitt will undoubtedly go down as one of the greatest NCAA basketball coaches of all time.

The woman known for her intimidating glare amassed 1,098 wins in her career — plenty good for most of all time — and eight NCAA women's basketball championships — the second most in women's college basketball history.

She was inducted into the Women's Basketball Hall of Fame in 1999.

She also became a Presidential Medal of Freedom recipient in 2012.

Summitt is survived by her son, Tyler, who has followed in her footsteps as a basketball coach.

This video includes clips from the University of Tennessee, CBS, WBIR and images from Getty Images.