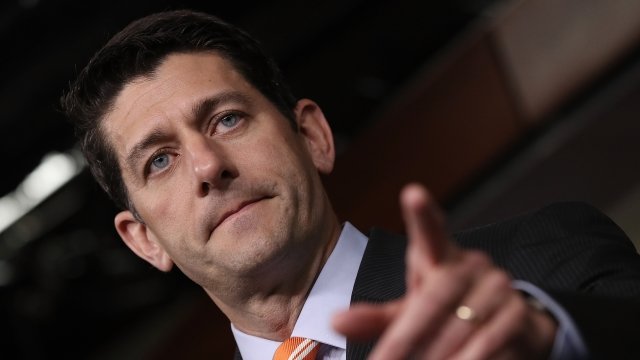 House Speaker Paul Ryan says Congress will find a compromise that lets those protected by the Deferred Action for Childhood Arrivals program stay in the U.S. — but that'll likely take some work.

"I think people should rest easy," Ryan said. "And I think the president made the right call, and the president also gave us the time and space we're gonna need to find where that compromise is."

The Trump administration said this week it would rescind DACA, an Obama-era program that allows some undocumented immigrants to remain in the U.S.

That decision received some backlash. New York Attorney General Eric Schneiderman filed a suit on behalf of 15 states and Washington, D.C., against the Trump administration.

Ryan said he agrees with Trump's decision to end the program and claimed former President Barack Obama overstepped his constitutional bounds. He also said the DACA dilemma is the symptom of a larger problem.

"We do not have control of our borders," Ryan said.

So Ryan says Congress will work on a DACA compromise and fixing what he calls the bigger issue at hand.

Thousands March In Chicago In Opposition To DACA Decision

The Trump administration announced a six-month grace period, giving Congress time to work out a deal. We don't know yet what that deal will look like, but a version of the DREAM Act could be back on the table.

The bill aims to provide a pathway to citizenship for undocumented immigrants who came to the U.S. as children. Senate Minority Leader Chuck Schumer says Democrats are prepared to tack the bill onto must-pass legislation.

Speaker Ryan admits lawmakers need to come up with a plan for "Dreamers." But as of Thursday morning, he hasn't said if he'll bring the DREAM Act up for a vote in the House.

"This is a home that people know, and they don't know any other country as a home," Ryan said. "And so I think there is a serious, humane issue here that needs to be dealt with. ... What we don't want to have happen is another DACA problem 10 years from now."