Paul Ryan Won't Defend Trump Now, But He Won't Unendorse Him Either 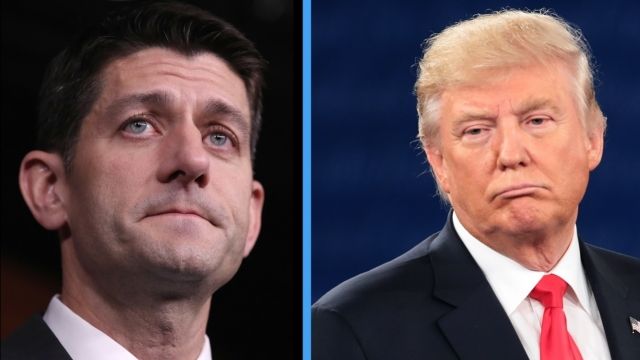 Ryan's decision came the same day Trump's running mate made his first public appearance since the release of a lewd Trump tape.

"You know, I'm automatically attracted to beautiful — I just start kissing them. It's like a magnet. Just kiss. I don't even wait. And when you're a star, they let you do it. You can do anything," Donald Trump said in a conversation aboard the Access Hollywood bus in 2005.

The fallout from the soundbite heard 'round the world is now shaking up Congress.

Ryan's staff uninvited Trump to a campaign rally held in Wisconsin on Saturday.

On Monday, Ryan held a conference call with Republican members of the House to try to figure out how to approach the Trump situation.

According to reports, he told his colleagues he will focus on winning congressional elections to keep the Republicans' majority.

But Ryan could end up being the loser in this situation. Some House members were reportedly furious with him.

According to The New York Times, one congressman called those distancing themselves from Trump "cowards."

But if you think not defending Trump means Ryan's no longer supporting him, you're wrong. Ryan isn't pulling his endorsement of the Republican nominee.

For his part, Trump responded on Twitter, saying Ryan should stop fighting him.

Meanwhile, Trump's running mate, Indiana Gov. Mike Pence, made his first public appearance since the tape surfaced. He seemed to put to rest the rumors that he could drop out of the campaign.

"He showed humility to the American people, and then he fought back and turned the focus to the choice that we face, and I'm proud to stand with Donald Trump," Pence said at a rally in North Carolina on Monday.