Pele Hospitalized And Nobody Is Sure How He's Doing 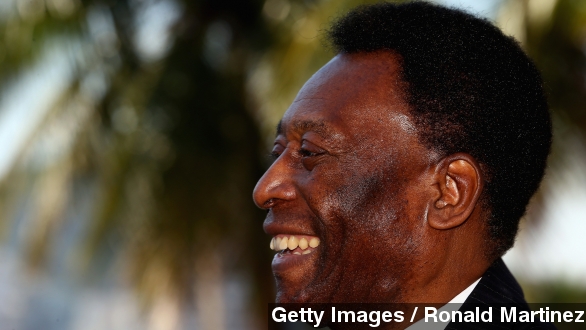 The soccer legend Pele is in the hospital, after being admitted for a urinary tract infection. But nobody seems quite sure how he's actually doing.

The soccer world is watching with bated breath as living legend Pele is in a hospital in São Paulo — and there are conflicting reports about his condition.

Pele was first admitted to the hospital for a urinary infection, less than two weeks after having surgery to remove kidney stones. (Video via Albert Einstein Hospital)

On Thursday, São Paulo's Albert Einstein Hospital released a statement saying the 74-year-old had been moved to a special care unit, although it didn't specify exactly what that meant.

Despite reports that Pele's condition was worsening, ESPN passed along the news that Pele's representative said he was doing fine.

British journalist Alex Bellos tweeted that part of the hubbub might have been lost in translation, writing "Some creative translation on behalf of UK press. Pele has been taken into a ward for 'special care'. Not the same as 'intensive care.'"

It wouldn't be the first time a visit to the hospital has sparked fears for the three-time World Cup winner's life.

Pele's past health problems have even lead to false rumors of his death grabbing headlines, like back in March when CNN tweeted that the legend had died, following Twitter rumors.

In 2012, Pele's uneventful hip surgery also made headlines, showing just how much the Brazilian means to the soccer world.

Pele won his first world cup when he was only 17 years old. He went on to win two more, and he holds the record for most goals scored, totalling more than 1,200 in all career competitions. (Video via Fusion)