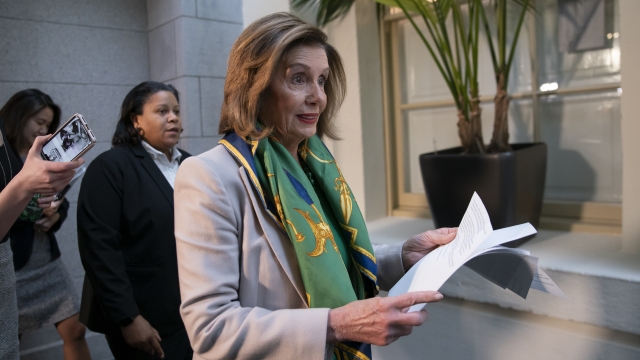 The speaker has said she wouldn't send the articles until the Senate showed it would hold a fair trial that included witnesses and documents.

Senate Majority Leader Mitch McConnell said the Senate's impeachment trial will likely start next week. He made that announcement after House Speaker Nancy Pelosi said the House will vote Wednesday to send the articles of impeachment to the Senate, as well as name impeachment managers.

It's been weeks since the House voted to impeach President Trump on articles of abuse of power and obstruction of Congress.

According to The Wall Street Journal, it's unlikely that senators will vote to dismiss the articles outright. But Pelosi has said she intended to keep them in the lower chamber until the Senate showed it would hold a fair trial that included witnesses and documents.

But McConnell has made it clear that's not going to happen — at least not at first.

On Tuesday, Sen. Lindsey Graham, the chairman of the Senate Judiciary Committee, told The Wall Street Journal there will be an opportunity to make a motion for witnesses and documents.

Some Republicans have said they are open to hearing from additional witnesses after the case has been presented first.

Pelosi took her time making this decision, and that tested some Senate Republicans' patience. Sen. Josh Hawley introduced a resolution that would dismiss articles of impeachment against President Trump for failure to prosecute, which McConnell has backed. Three days later, Graham introduced a resolution demanding Pelosi "immediately" send the two articles to the Senate.

Pelosi blasted McConnell in a statement Tuesday, saying: "The Senate GOP Leader has signed on to a dismissal resolution. A dismissal is a cover-up. The American people will fully understand the Senate's move to begin the trial without witnesses and documents as a pure political cover-up. Leader McConnell and the President are afraid of more facts coming to light."

But on Tuesday, McConnell said "we have entered Bizarro World" if Democrats assume the trial is a cover-up just because the Senate doesn't bring forward new witnesses or documents.

"The latest Democratic talking point is that if the Senate conducts trial based on what the House itself looked at, we'll be engaged in a cover-up," McConnell said. "Did you get that? Unless the Senate steps outside our lane and take it upon ourselves to supplement the House case, it's a cover-up?"

Pelosi has not indicated how many impeachment managers she'll name or hinted at who she has in mind.