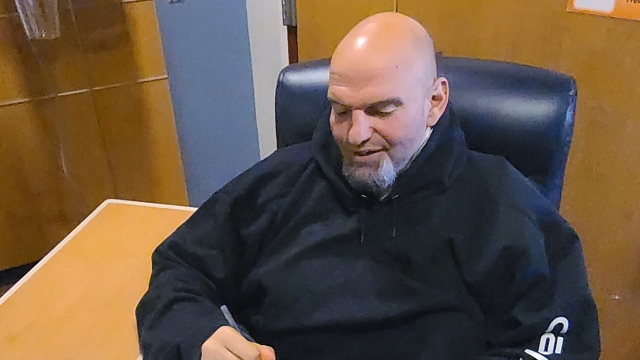 Pennsylvania Lt. Gov. John Fetterman, the Democratic nominee in the state's high-profile U.S. Senate contest, has been released from the hospital after a stay of more than a week following a stroke, his wife and his campaign said Sunday.

"João is headed home — time to rest and recover (and annoy me)!" tweeted his wife, Gisele Fetterman, who was born in Brazil and often refers to her husband with the Portuguese translation of John. "I'm so grateful for the amazing staff at Lancaster General for taking such good care of him from start to finish."

Fetterman said in a statement that he was headed home to Braddock and "could not be happier to finally be heading home to be with my family."

"I am feeling great, but per my doctor's orders, and Gisele's orders, I am going to continue to rest and recover," he said. "Later this week I will have a follow-up visit with my doctors at Penn Medicine Lancaster General Hospital. I am going to take the time I need now to rest and get to 100% so I can go full speed soon and flip this seat blue."

The good news is I’m feeling much better, and the doctors tell me I didn’t suffer any cognitive damage," said Lt. Gov. John Fetterman.

Fetterman, 52, had been at Lancaster General Hospital since May 13. He had been scheduled to appear at a campaign event at Millersville University, but his wife "noticed that John was not himself, and shortly after he started slurring his speech," a campaign spokesperson said.

Fetterman said in a written statement that he had a stroke "that was caused by a clot from my heart being in an A-fib rhythm for too long," but that doctors were able to remove the clot "reversing the stroke," and got his heart under control. Doctors told him that he "didn't suffer any cognitive damage," he said.

The Republican race remains too close to call and is likely headed for a statewide recount to decide the winner of the contest between heart surgeon-turned-TV celebrity Dr. Mehmet Oz and former hedge fund CEO David McCormick. The incumbent, Republican Sen. Pat Toomey, is retiring after serving two terms.