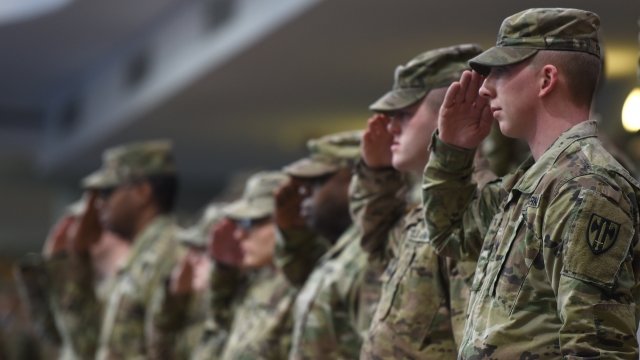 The military plans to add more troops, ships and aircraft now that Congress has rolled back spending caps on the defense budget.

Congress recently gave the military a $165 billion gift by rolling back restrictive caps on defense spending levels. Now, the Defense Department is laying out what it wants to do with its new money.

The DOD is asking Congress for a $686 billion budget in fiscal year 2019; that's 10 percent over its current funding levels. The department argues it needs to make up for years of funding cuts imposed by those spending caps.

The new money would let the Pentagon hire over 24,000 more active and reserve troops. It's also expected to fund building 10 new Navy ships, and more F-35 and F/A-18 aircraft.

Troops would also get a 2.6 percent raise under the budget, which the Pentagon is hoping to offset with internal bureaucratic reforms.

The administration says this new budget is focused on combating potential threats from rival powers, like China and Russia. That's in line with the strategy Defense Secretary Jim Mattis outlined in January.

But the budget is just a wish list; Congress ultimately figures out how much money the military actually gets and where it all goes.