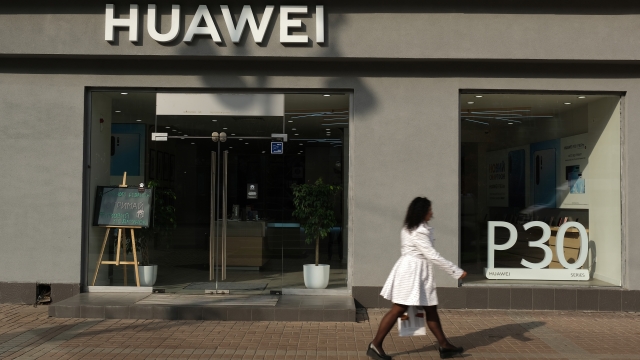 The rule would tighten a loophole that allows U.S. companies to sell to Huawei without a license under certain conditions.

The Pentagon is expected to support a rule change that would make it more difficult for U.S. companies to do business with Chinese tech giant Huawei. That's a reversal of its previous stance.

The Trump administration has long believed Huawei devices pose a national security threat. It has pressured allies to move away from working with the telecom company.

The U.S. placed the Chinese tech giant on a trade blacklist last year. That restricted American firms from selling components to Huawei without first getting government approval. But the Commerce Department extended a temporary license in November to allow limited transactions.

A loophole allows U.S. companies to sell to Huawei without a license under certain conditions: They must be shipping from an overseas location, and the goods they're sending have to be made of less than 25% American-made materials or patents.

The Commerce Department's proposed rule tightens that loophole significantly — the percentage allowed would drop to 10%.

The rule change has been on hold since some government officials argued the measure could actually harm national security. The Wall Street Journal reported last month that the Defense and Treasury departments are worried the potential revenue loss to American companies could hurt research and development budgets, eventually causing more harm than good.

The Chinese government invests tens of billions of dollars in Huawei, giving it a competitive edge against U.S. companies. The New York Times notes that President Donald Trump's advisers have warned against allowing Chinese companies to get ahead in 5G technology, for fear that it could compromise intelligence between the U.S. and allies.

Trump administration cabinet officials are expected to meet in the coming weeks to discuss whether or not to implement the proposed rule.