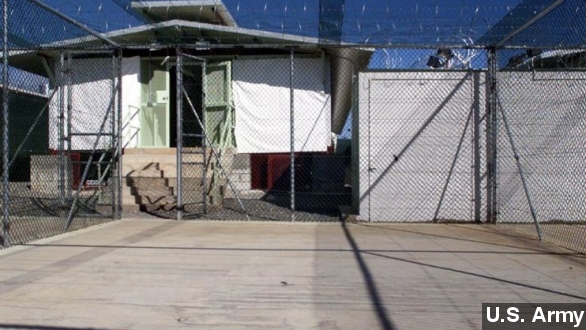 Tuesday the Pentagon announced it transferred three Uighur Chinese nationals to Slovakia from Gitmo. The Pentagon called the move "a significant milestone" in the effort to close the facility.

Guantanamo Bay is arguably one of the world's most infamous prisons — the target of a lot of criticism both domestically and internationally. (Via National Geographic)

"A place where the U.S. could avoid playing by its own rules. Rules like a right to a fair trial, innocent until proven guilty." (Via RT)

A judge actually ordered the newly released men to be freed back in 2008 — but until Slovakia took them, there hadn't been a place to send them. The U.S. couldn't send them back to China over concerns of mistreatment by the Chinese government. Uighurs are a Muslim minority in China and have been treated like terrorists.

And while the Pentagon says it's a move toward the facility's closure, it's been almost five years since President Obama signed this executive order to close the prison.

Which promptly faced this roadblock — when Congress denied him the funds to do it. (Via The New York Times)

But in May of this year, Obama reiterated the desire to close the facility.

OBAMA: "History will cast a harsh judgment on this aspect of our fight against terrorism." (Via The Wall Street Journal)

See, Congress has put restrictions on the transfer of detainees into the United States, so whenever it needs to happen, the U.S. has to find a country willing to take them. According to the administration, it costs the U.S. $1 million per detainee per year. (Via The White House)