What We Know About North Korea's Latest Missile Launch 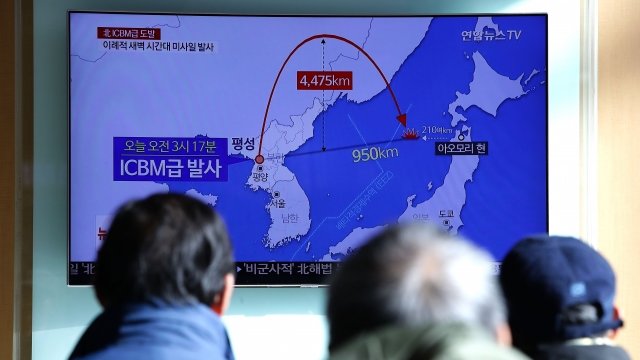 The Pentagon says a missile was launched from a city near North Korea's western coast and traveled about 620 miles before landing in the Sea of Japan.

North Korea launched a ballistic missile it claims is capable of "striking the whole" U.S. mainland.

The Pentagon says the missile was launched from a city near North Korea's western coast and that it flew east, landing in the Sea of Japan after traveling about 620 miles.

North Korea says its "newly developed" missile was tipped with a "super-large" warhead. This was the Hermit Kingdom's first launch since September.

Watch A North Korean Soldier's Risky Defection Across The DMZ

For the first time, the United Nations Command has released security footage of a North Korean's defection across the demilitarized zone.

Both leaders previously vowed to increase pressure on North Korea and repeatedly urged world leaders to do the same.

The U.S. State Department denounced the launch and called for unity in denuclearizing the North. It also said diplomatic options remain viable — "for now."

The United Nations Security Council will hold an emergency meeting Wednesday. Leaders from South Korea and Japan will reportedly seek additional sanctions against the North.